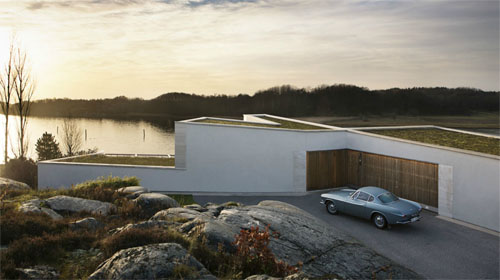 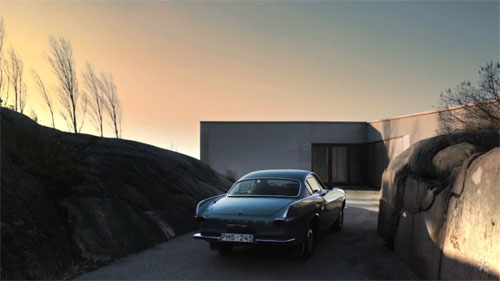 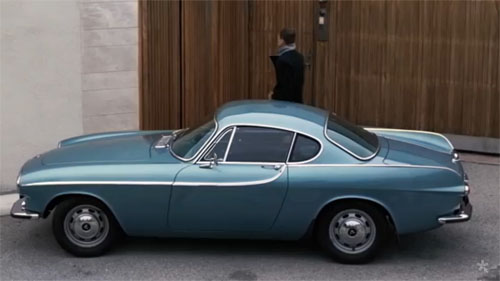 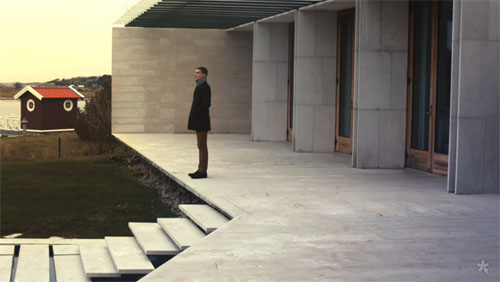 ‘Villa at Amundön’ is a house designed by the famous Swedish architect Gert Wingårdh from Wingårdh Arkitektkontor in Brottkärr, Hovås south of Göteborg in Sweden. Special in its proximity to the water,
the design utilizes the conditions of the site to incorporate the surrounding landscape
into the interior as well as the experience of the approach.

The steep gradient of the plot makes the entrance almost invisible.
The driveway speaks of a big house, but the discreet door in the wall gives no hint of what is on the inside. The view is also concealed by the wall and the rocks. Indoors not only the house but also the sea view is opened up.

Looking straight ahead, the room plunges down into a deep, narrow staircase commanding a view of the bay
through a glazed section seven metres high.
An hourglass which has its counterpart in the residential floor symmetrically opening up round the axis of the staircase.
The rooms are tied together by the terrace outside, which in turn is linked to the water beneath by the pool on the central axis.

Gert Wingårdh started as a Postmodernist in the 1980s, as one of the architects who broke away from the strong Functionalist (International style) norm that held sway over Scandinavia longer than in other countries.

He is known to pick up new trends in architecture quickly and interpret them with a personal expressive language which integrates the surrounding landscapes into the projects: “His buildings do not stubbornly adhere to one style but are a response to the task in hand and the surrounding environmental conditions. Swedens [sic] rich tradition of building with wood and a strong ecological awareness are combined with high tech expertise”.

Wingårdh has himself described his architecture as ”high organic”, combining high tech with organic architecture. He has also been described as a ”maximalist” rather than a ”minimalist”, his buildings being ”a kind of modern baroque”. He has shown influences from and kinship with such different architects as Frank Lloyd Wright, Hans Scharoun, Carlo Scarpa, Frank Gehry and Peter Zumthor. Another paradoxical description states that his buildings are both ”playful” and ”strict”.

A feature of Wingårdh’s is to surprise the visitors of the buildings—keeping the entrance of a building low and then ”heighten the sense of space and drama when entering the main rooms”.[20] He also has a good knowledge of details as well as an understanding of intricate building structures which requires good knowledge of sociological processes and human behaviour.

Wallpaper* and Volvo have come together to take you deep into the heart of the Swedish design story. A serie of four short films present a visual journey through the Sweden best architecture, design and visual culture, as well as the very best of Volvo, past, present and future.