Dr. Fries torg, is a so-called parallel building blocks Södra Guldheden, Göteborg, which was built in 1951-58 for the City’s housing companies and was completed in spring 1953. Total built 265 apartments until 1958, under the name “Guldhedscentrum”. The two retail row houses with two residential floors above parallel to each other along a large sunken rectangular square surface. Dr. Fries Square is one of three smaller “local market squares” in Guldheden within 5 to 10 minute walk distance. Square surface framed by two parallel residential and retail complexes, with loggias which protects against wind and rain. At the far short side, a smaller rock party in the day, and the square’s entrance opens it fully. 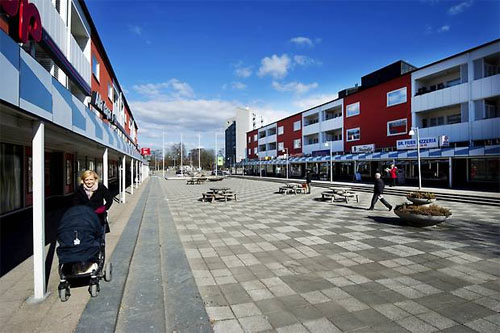 The square got its name in 1949 to the memory of Dr. Robert Fries (1840 to 1908), son of Elias Fries. It was the architects January Wallinder and Sven Brolid who designed the square.
“Doktor Fries squares belongs to the generation center facilities taking a first step towards allowing the stores to free themselves from the residential buildings and through traffic separation also from the street. The shops are here for two longhouses around a square with a character of Italian piazza, meant for pedestrians. Still located however, two-story homes on top of the shops, which caused particular problems.