Sockerbruket at Klippan in Göteborg 🇸🇪

Sockerbruket at Klippan in Göteborg is a former industrial complex that was used for the sugar production.

Klippan is an area alongside the river Götaälven in the western part of Göteborg, near Älvsborgsbron. Klippan is located in the district of Majorna.

The name Klippan or Ekenäsklippan is considered to be from the mountain, “Lilla Klippan” or “Skinnareklippan”, which was located northeast of the Old Älvsborg fortress, and which formed the harbor itself Klippan or “the cliff”. Already in the Karlskronik from the 1450s, the “Klippan” is mentioned. On the small mountain, you’ll find the Sankta Birgitta’s chapel, built in 1857 by David Carnegie. The Stora Klippan has long been level with the ground.

Klippan can be considered to be Göteborgs first real port, because further toward the sea, the water was not deep enough for a port. Subsequently, goods where transfered with smaller boats to their final destination towards the city.

At Klippan, the Eastindian company had its port for the ships that went and came back from China.

The former sugar industry also characterizes the area. Toppsockerfabriken at Banehagsgatan 1 is also called the top sugar station, the centrifuge station and Stora Slottet, completed in 1901.

Hans Hedlund designed it in neo-Gothic style and gave the building a strong castle character through thorns and gates and a fog lamp facing the harbor entrance. The height corresponds to the old castle of Älvsborg. The building raged many of the castle’s remains but part of the ruin remained. It belongs to remains of the old foundation and a walled stone dated 1588 which meets the main entrance. 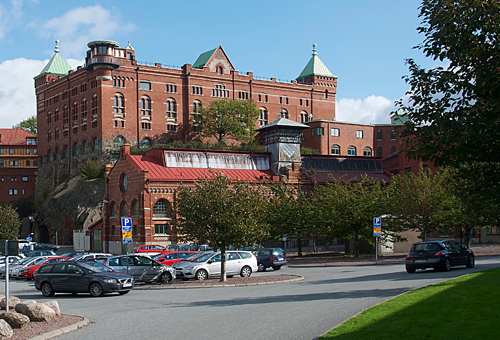 In 1957, production ceased and after the city of Göteborg took over and renovated the building, hundreds of artists moved into the Konstnärernas Kollektivverkstad in the early 1970s.

The Sockerbrukets office at Banehagsgatan 15 was built in 1848 as a sugar magazine on land that was completed in the late 1700s. Both raw sugar and refined sugar have been stored in the premises. From the end of the 1890s, when a treasurer and four bookkeepers moved into the upper floor, the premises worked as the sugar consumption wage office. 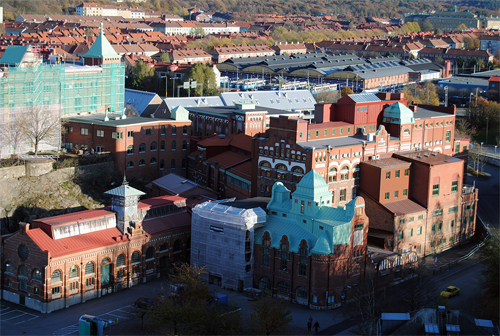 In the autumn of 1917, the other nine officials of the Sockerbrukets also moved from the headquarters of Södra Hamngatan. After the closure of Sockerbrukets in 1957, the building has been used as offices, workshops and cafés. The power station at Sockerbruket was completed in 1899 when switching from steam to electricity on Carnegie’s use. It was built primarily for the sugar industry, but initially also provided the porter beer brewery with electricity and, if necessary, also served as a transformer station for AC and DC. A wall-mounted wall along the entire back of the building ran until 1940 a boiler center that got its charcoal via conveyors from boats on the quayside. The power station was in use until 1957 when sugar production was stopped. Since 1963 the building has been used as a workshop.