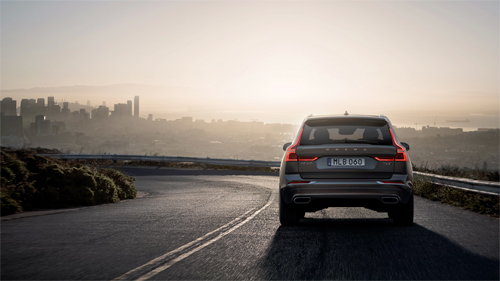 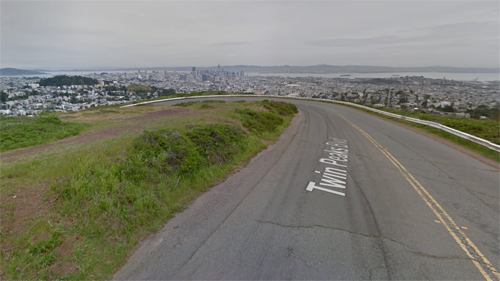 Twin Peaks Boulevard is a road on Twin Peaks in San Francisco in California, USA.

The Twin Peaks are two prominent hills with an elevation of about 282 m located near the geographic center of San Francisco, California. Only 283 m Mount Davidson is higher within the city.

The North and South Twin Peaks, also known as “Eureka” and “Noe” respectively, are about 200 m apart; Twin Peaks Boulevard runs a figure eight around them. The peaks form a divide for the summer coastal fog pushed in from the Pacific Ocean. Their west-facing slopes often get fog and strong winds, while the east-facing slopes receive more sun and warmth. Elevation at each summit is just over 270 m. Thin, sandy soil is commonplace on Twin Peaks, making them susceptible to erosion.

A permanent fixture of the city landscape, you get your first glimpse of Twin Peaks towering over the city as you ride across the Bay Bridge. Located in the geographical center of San Francisco with an elevation of about 925 feet (282 m), Twin Peaks offers a stunning 360-degree panoramic view of the city, the bay and the ocean beyond.

On a daily basis, you will see countless bicyclists racing to the top and photographers and filmmakers jockeying for the perfect shot. The view, which spans from Ocean Beach and the Golden Gate Bridge to the Mission District and Potrero Hill, will leave you breathless. Twin Peaks should be firmly planted on any visitor’s AND local’s must-see list.

Wear sturdy shoes and dress for windy conditions if you are planning to hike to the top. There is a terrific view at the top but if you want to get the full experience, enjoy a half mile walk around the whole area. There are some relatively steep ascents and descents on this trail. You can also drive to the summit parking lot where a sidewalk curves around a portion of the hill and you can enjoy the view from a telescopic viewer for 50 cents.

There are two common ways to get to Twin Peaks by car:

If you are not driving, there are also some other options:

Bike rental: You can rent a bike and take the same route to Twin Peaks as you would with a car. Please note that there are no bike lanes on this winding road so you have to be very cautious.
Hiking: Follow the same path that you would take in a car or bike. However, once you are at the base of the peaks you can choose to climb straight up the hillside rather than take the roadway.
Public transportation: There are currently no public buses that actually go to the top of Twin Peaks but you can take 37 Corbett MUNI bus close to the base of the peak and then hike up to the top.
Tour bus: Many of the tour bus operators in San Francisco include Twin Peaks on their trip. 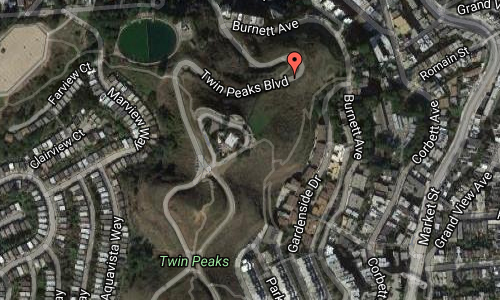 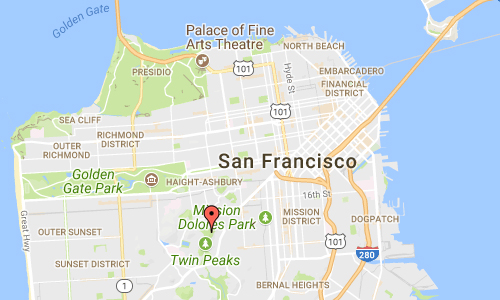 More information at en.wikipedia.org and sfrecpark.org.