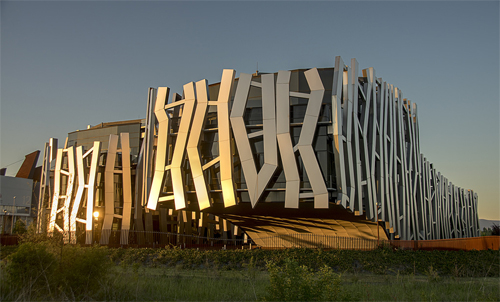 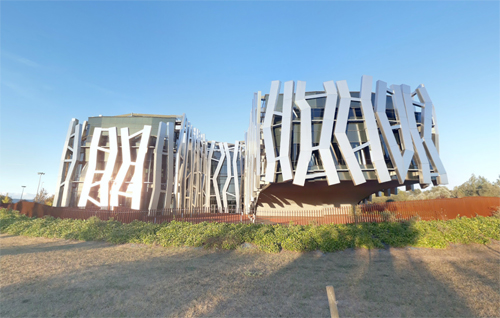 Caja Vital Kutxa Bank HQ is located on La Biosfera Ibilbidea in Vitoria-Gasteiz, Spain. This is the headquarters for the local savings bank. The building reproduces the scale of the surrounding small woods, a park of the Natura 2000 networking programme.

The floor plan has a chromosome shape with four arms. The structural concept is based on pairs of exterior metal supports, clad in stainless steel composite panels. One of the arms has been conceived as a 26 meter cantilever. In this case the concept changes and the pairs do not have any structural function.
A double height hall located in the heart of the building has its two façades enclosed by a work of art. They have been constructed with bright red polyurethane panels with a manually painted biological pattern.
The idea is to identify the building as a live organism in motion. A black skin made of glass protects the inhabited spaces behind the stainless steel pairs. 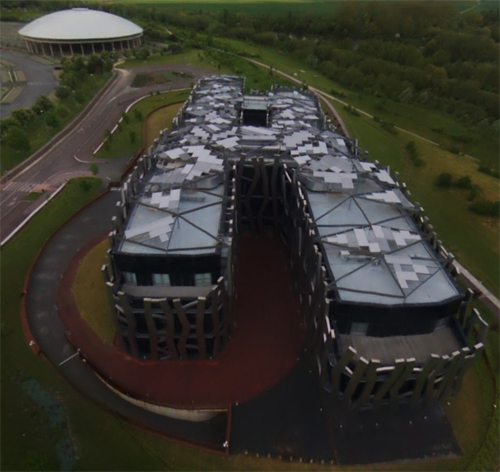 Kutxabank is a bank based in the Basque Autonomous Community of Spain. It was officially founded on 1 January 2012 out of the merger of three Basque financial institutions operating on their respective provinces: Bilbao Bizkaia Kutxa (BBK), Gipuzkoa Donostia Kutxa (Kutxa), and Caja Vital Kutxa (Vital).

Vitoria-Gasteiz is the seat of government and the capital city of the Basque Autonomous Community and of the province of Araba/Álava in northern Spain. The dwellers of Vitoria-Gasteiz are called vitorianos or gasteiztarrak, while traditionally they are dubbed babazorros (Basque for ‘bean sacks’).

Vitoria-Gasteiz is a multicultural city with strengths in the arts, commerce, education, healthcare, architectural conservation, aeronautics, vehicle industry, oenology and gastronomy. It is the first Spanish municipality to be awarded the title of European Green Capital (in 2012) and it is consistently ranked as one of the 5 best places to live in Spain. The old town holds some of the best preserved medieval streets and plazas in the region and it is one of very few cities to hold two Cathedrals. The city also holds well known festivals such as the Azkena rock festival, FesTVal, Vitoria-Gasteiz jazz festival, and the Virgen Blanca Festivities.

Vitoria-Gasteiz’s vicinity is home to world-renowned wineries such as Ysios (by Santiago Calatrava) and the Marqués de Riscal Hotel (by Frank Gehry); relevant heritage sites including the Neolithic remains of Aizkomendi, Sorginetxe and La chabola de la Hechicera; Iron Age remains such as the settlements of Lastra and Buradón; antique remains such as the settlement of La Hoya and the salt valley of Añana; and countless medieval fortresses such as the Tower of Mendoza and the Tower of Varona. 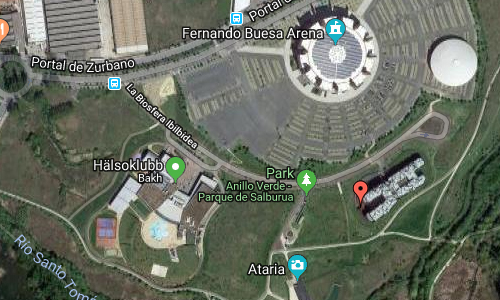 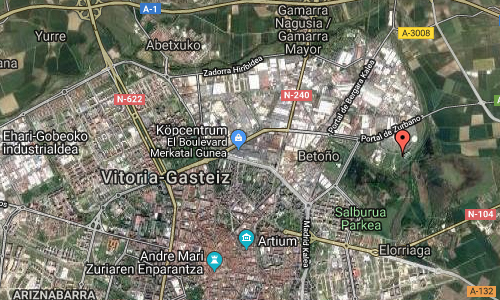 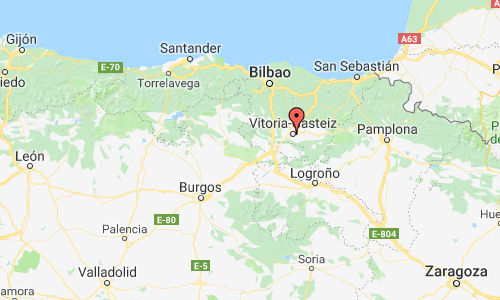