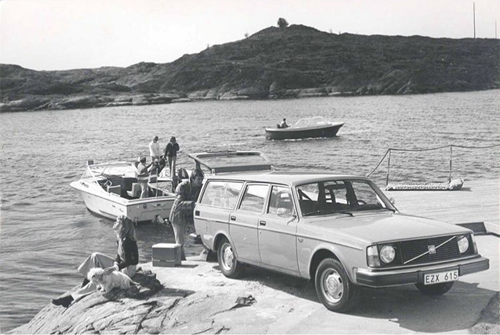 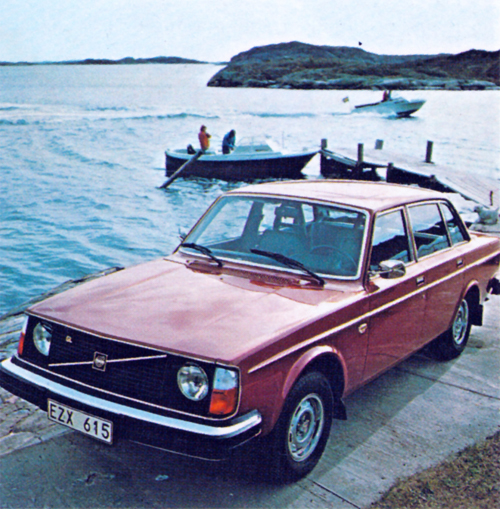 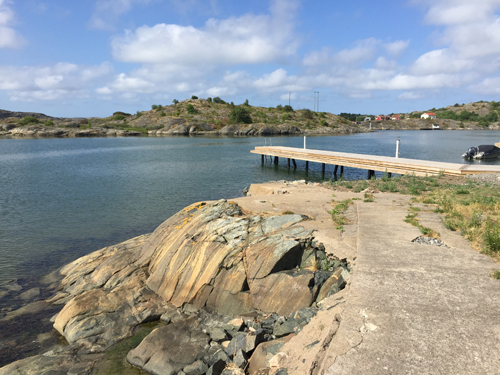 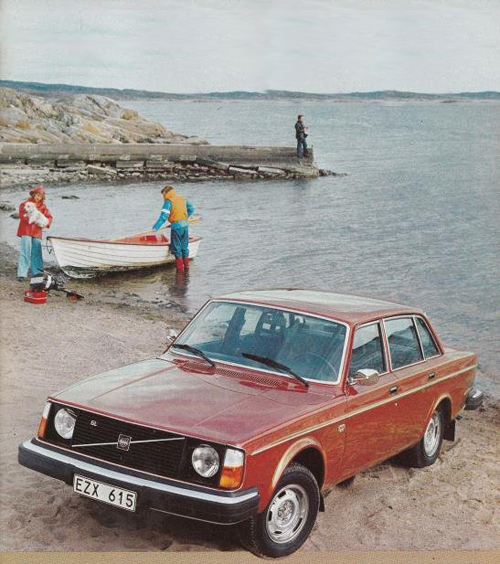 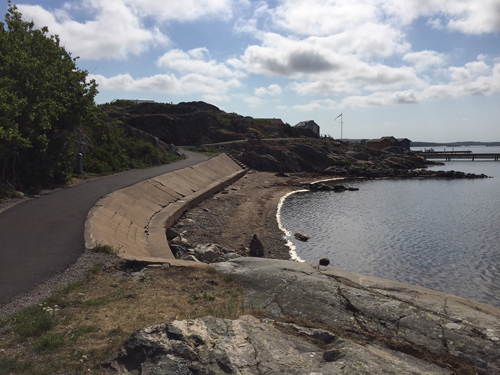 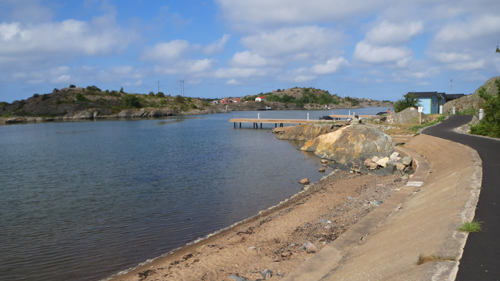 The beach had a concrete wall that was poplar to sit on and protected the island from flooding during the wintertime when hard winds were blowing on the coast.

Approx 1960 – the beach with the restaurant building in the background 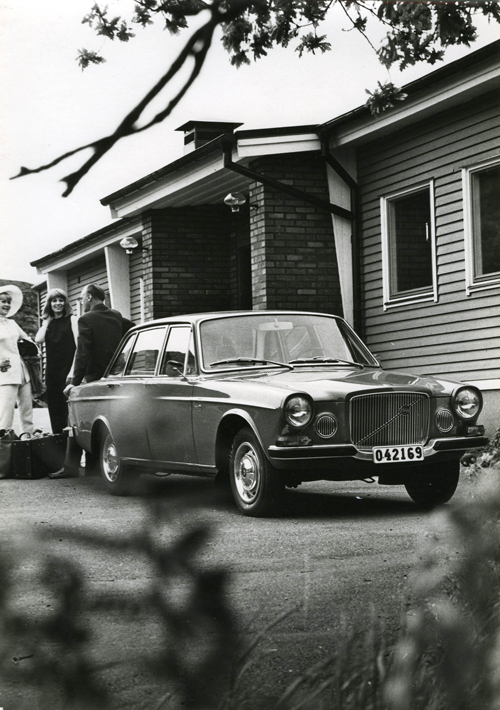 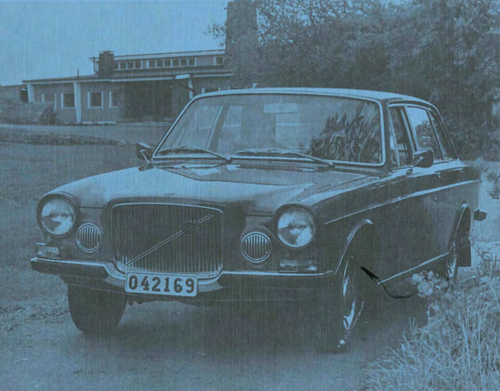 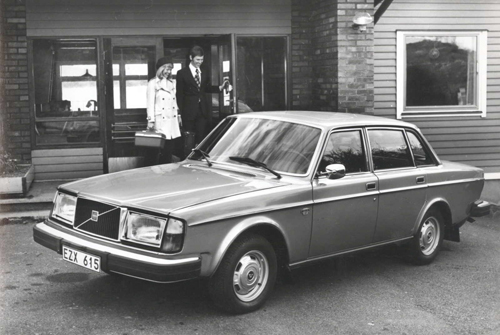 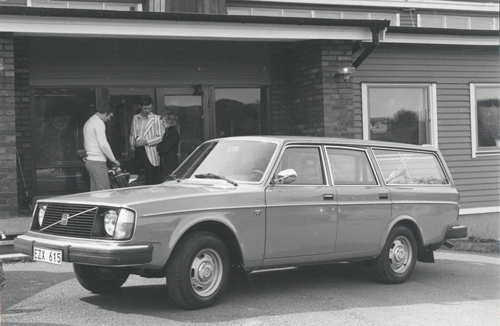 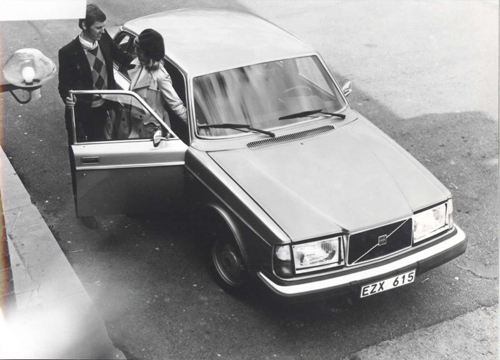 The restaurant and reception building used to be the first place where visitors went when the entered the island for their vacation. Here they would hear in which stuga (little holiday house) they would stay. A stay would be between one and three weeks.
The restaurant building was also the place where almost every body used to come for dinner or had to pick up food in a box. Most houses didn’t have kitchen facilities, so there was some kind of planning at what time holiday guests would be welcome for the evening meal. People also picked up the evening dinner in a box to eat it in their own stuga or summer house. The dinner room has huge panoramic windows on the seaside, which made it a popular place to eat.
From the early seventies, electricity was on the island and life became a bit more luxurious, people were able to eat breakfast, lunch and dinner at the restaurant building

Panoramic view from the restaurant (Photo by Jonas Sanderman‎) 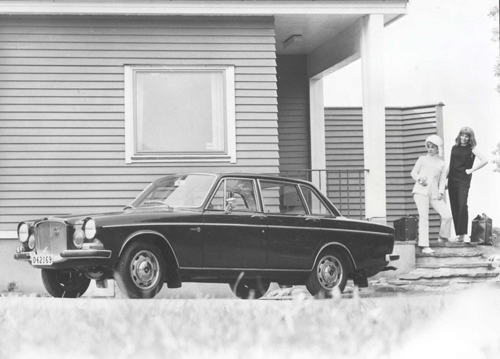 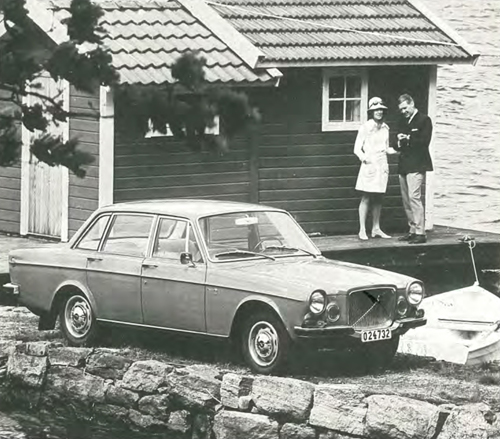 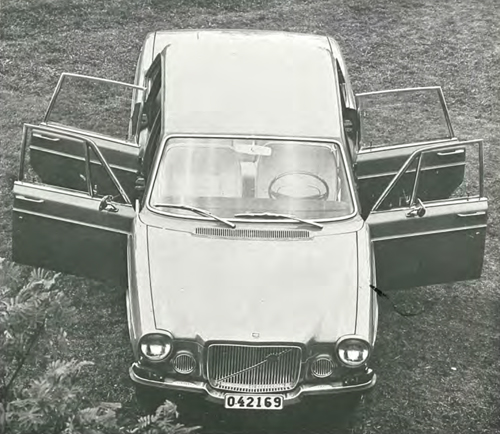 2019 – Stairs near Playground on Lilla Fjellsholmen 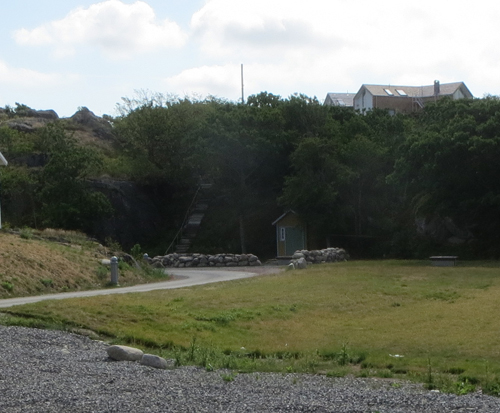 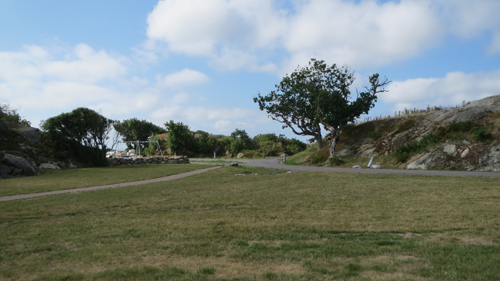 ——-
Bridge to the island

2014 – Bridge from Vedhall to Trälen, before the new construction started! (Photo by Christer Larsson)

Volvo Photo Locations has found many original material from the various Volvo publications that were made on the Trälen island. If you look at the island, there are several places that were popular for photography:

AB Volvo bought the island in the late 40’s and owned it until the 90’s. After Volvo had abandoned the island a period of decay started. Since a few years, after many years of inactivity, the island is alive again, with a new name, Lilla Fjellsholmen and is inhabited year round. New houses have been built. But many places and buildings are still remembering us to the places when it was a summer camp to many Volvo employees and their families. 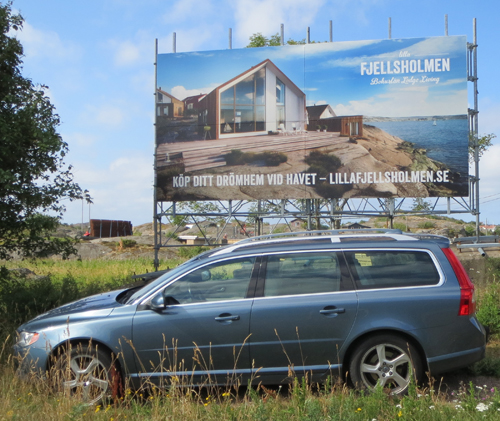 During the summer of 2018, an article in the swedish Klassiker magazine and the cover on Volvo Klassiker magazine were the trigger to visit the island Trälen. By coincidence, I was just spending my summer vacation in the same area! 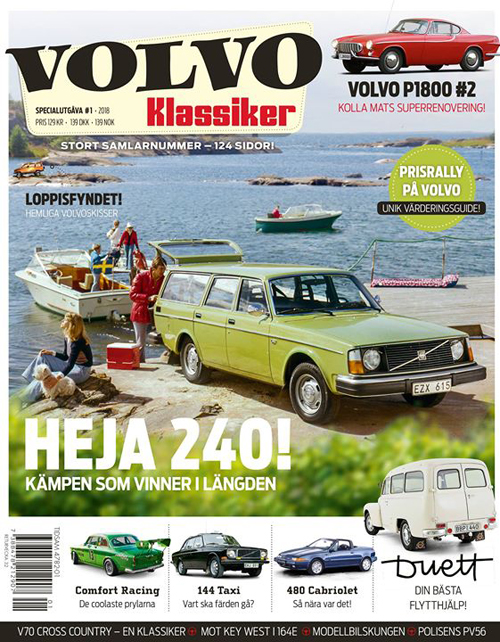 Cover of the Volvo Klassiker magazine

Even today, the old mailbox for Volvo at Trälen is still hanging there… :-)

In 1948, AB Volvo purchased the island Trälen to offer their employees a place to have vacation. In those days, it was popular for large companies in Sweden to offer employees a place to stay during the vacation. Vacation was new after the second world war and for many workers they did not have any alternative or place to stay, once they had time off during the summer. Staying at their small houses in the city with their children was not easy.

——-
Volvo’s summer camp was a holiday island during a 40-year period, the idea was to offer a summer paradise for Volvo employees with their families. When the island became less popular, since cheap charter trips to the sunny south of Europe became popular, the island with the small houses were abandoned. Over time they were vandalized and the decay became a fact.

In the 1990s, a local developer bought the island and went through a detailed plan for new buildings.

Finally in 2012, the island was bought by Bansvik Holding AB, which has now started to build 63 year-round houses with sea view terraces and small guest houses. On the island there are also plans to built a large house with eleven apartments.

How did this all happened and what is the history of Trälen?

In the 1940s, the island, which at that time was called Trälen, was bought by Volvo to be used as holiday accommodation for the employees. When the record year stood for the door, cottages, common room and restaurant were built on the island. For a few decades, this was a summer idyll for the Volvo employees and their families. Now it’s time to renew Lilla Fjellsholmen and fill the island with life again.

1970 – Article from the Volvo Kontakt magazine for employees regarding the time to book for your two weeks at Trälen.

In 2014, Kungälv’s Environmental and Building Committee has granted building permits for the display houses that will be ready for the summer 2015. The plan for Trälen includes a small society with 63 single-family homes, at least ten apartments, a common building, docks and sea sheds, and a kiosk.

“It’s a great opportunity to exploit an entire island, there is something unique on the west coast. We have put a lot of time and effort into creating something very nice with modern architecture adapted to the environment” says Göran Moser, who would rather name the island Lilla Fjellsholmen than Trälen as it was previously named.

He is one of six private individuals with a background in the construction industry who bought the island from the former owner. The detailed plan they inherited. It allows about 70 houses of 75 square meters in building area, with a living space of between 100 and 130 square. In addition, there is a complement building of 25 square meters.

Building permits are now being sought for holiday homes, but the buildings have the same standard as the year-round housing and fit both couples and a small family with children, Moser emphasizes.

Three architectural students at Chalmers got to know the plans for Trälen and the project was their thesis project this spring.

“It is a bit unique because it is about placing the buildings carefully in nature, without blowing up which one usually does when building small houses” says Gustav Johansson and says that the houses should instead be on poles.

“The whole was important to us. We have looked at everything from roads to the social and the location of the houses. It is such a good location so we wanted many of the houses to take part of it, that a house would not ruin for another” says Filip Karlén.

The students also wanted to get away from the established picture of how a coastal society should look.
After graduating, they have started the company Cream Architects together and worked on to realize the project together with Lilla Fjellsholmen AB.

The detailed plan for the island also allows ten smaller apartments. These will be designed by the architect Gert Wingårdh who has a personal connection to the site.

“We are now waiting for advance notice from the municipality. The way the house will look is not quite clear” says Göran Moser.

In autumn 2014, clearing works was underway on the island and during the spring 2015 the three show houses will be built. At the turn of the year 2015–2016, he hopes that the municipal sewage system will be in Åkerhög a few kilometers away from Trälen. In that case, the first inhabitants can move in during the spring of 2016.

A mile south of Marstrand lies the island which, from the 1950s to the 80s, was a holiday village for Volvo workers. It was then called Trälen.
It then comprised 60 simple summer homes, community facilities and a restaurant.
The cottages have been hit by severe vandalism through the decades, but in 2006 there was still a TV show on the island. TV4 recorded the documentary Trälen på ön (Slaves on the island). People from different backgrounds would live together for 40 days. However, the series became an audience fiasco and got no continuation…
In the 90s, the island was sold by Volvo and bought by a local developer got through a detailed plan that allows new buildings on the island with minimal impact on nature.
At year-end 2011, Trälen was sold to the property development company Byggvesta from Nacka, near Stockholm.
The video for Håkan Hellström’s single ”Det kommer aldrig va över för mig” is partly recorded on the Trälen.
A few years ago, the island was sold to the current owners, six private individuals, several of whom are partners in the construction company Byggvesta.

Trälen, which lies about 10 kilometers south of Marstrand, was purchased in 2012 by real estate company Bansvik Holding AB, owned by Lars Jonsson. In the same vein, work began to recapture the island’s real name – Lilla Fjellsholmen.
“We tore the old holiday cottages last year. They were completely overdue and vandalized after standing empty for many years. Then we began to work with our idea of ​​how we wanted to develop the island and announced an architectural competition” he says.

Several architects submitted proposals and the company fell for one from three architectural students. Their degree project has now taking shape on the former holiday island.

“They have started a company and are strongly involved in the construction project together with an architect professor” says Lars Jonsson.

“The idea is that the houses should be built in natural places with minimal impact on nature. There will be built 63 independent houses with associated guest house, seabed and boat site and house prices vary between SEK 5.4 and 8.9 million. Later, a house with apartments will also be built, designed by Wingårdh Arkitekter”.

“The houses are built as year-round homes, and we hope that as many as possible will be” says Lars Jonsson.

The island lies quite remote from all other facilities, the nearest grocery store is located in Kärna and there is a bus line. By car it takes 40 minutes to get to Göteborg. But the road is by bit narrow and crooked.

“We have no opportunities to influence the Swedish Transport Administration here, but our hope is that there soon will be a walking and cycling path next to the road. After all, it is not only we who build here so there will be more housing and more traffic” says Lars Jonsson.

He hopes that the walking and cycling track can be built in connection with digging for municipal water and sewage to the island.

“The houses must be on the ground floor and on some sites we need to fill out” Lars Jonsson continues.

The bridge leading out to the island was once paid for by Volvo. It should be retained but supplemented with walking and cycling paths. There are also walking paths on the island that need to be cleared.

Lars Jonsson, who is raised in Lysekil, is very happy that the building was started in early 2015.

“I have been living in the United States for 30 years, but I am still a Bohuslän in my heart and staying here for a month a year” he says.

The former owner got through a detailed process through the detailed plan, which meant that the beach protection was revoked. That is why Lars Jonsson and his company can now build houses on the shore close to the sea!