How about the Dutch Grand Prix Formula One?

The Dutch Grand Prix (Grote Prijs van Nederland) was a Formula One automobile race held at Circuit Zandvoort, near Zandvoort, the Netherlands, from 1952 to 1985. It was a part of the World Championship from 1952, and designated the European Grand Prix twice, 1962 and 1976, when this title was an honorary designation given each year to one grand prix race in Europe.

1952 was the year of the very first Dutch Grand Prix when it was part of the third Formula One World Championship; this and the next year’s races were won by Italian Alberto Ascari.

More information on this first Dutch Grand Prix on second-a-lap.blogspot.se.

In 1955 saw yet another demonstration of Mercedes-Benz’s dominance, with Argentine Juan Manuel Fangio and Briton Stirling Moss dominating the proceedings; Moss followed Fangio closely all the way. The 1958 race was won by Moss in a Vanwall. 1959 saw Swede Jo Bonnier win his only Formula One championship event and 1960 saw Dan Gurney have an accident and a spectator was killed; the race was won by Jack Brabham in a Cooper.

From 1963 to 1965 saw Briton Jim Clark win all three events, and 1967 saw the introduction of the Lotus 49 with its brand new Ford-Cosworth DFV engine. The DFV won on its debut with Clark driving; this engine became the most successful and widely used engine among private teams until 1985. 1970, however, saw the 49’s successor, the 72 – which was just as advanced a design as the 49 had been 3 years earlier – win comprehensively with Jochen Rindt behind the wheel. Tragedy struck, however – Briton Piers Courage, driving a Frank Williams-entered De Tomaso crashed heavily near the notoriously fast Tunnel Oost corner after a wheel came off and hit him on the head, which killed him. The car, with Courage still in it, then caught fire and burned to the ground. 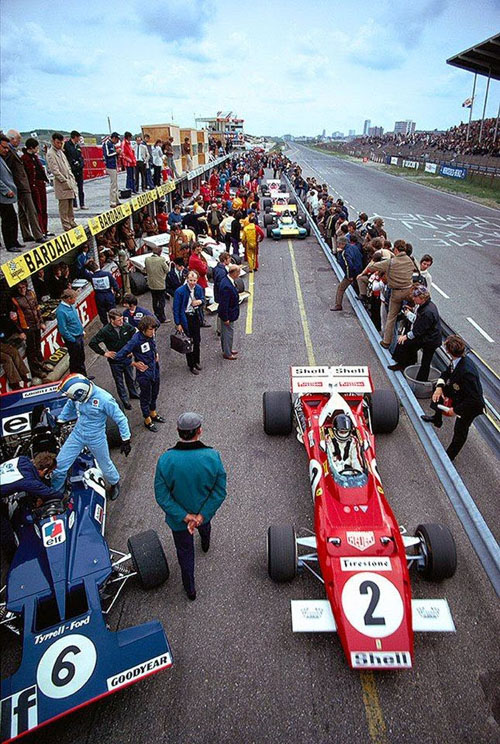 1971 saw Jacky Ickx win in a Ferrari after a spirited battle with Mexican Pedro Rodriguez in a BRM in rain-soaked conditions. There was no 1972 race, however. It was originally on that year’s calendar, but the drivers refused to race at Zandvoort, because the facilities and conditions of the circuit were out-of-date with Grand Prix racing at that time. 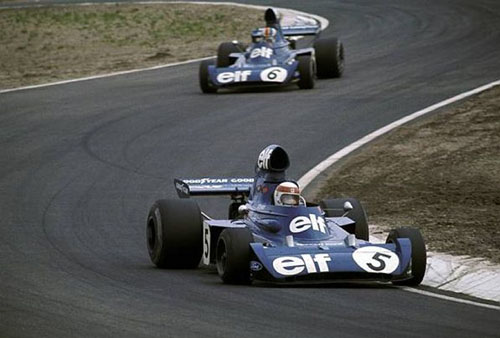 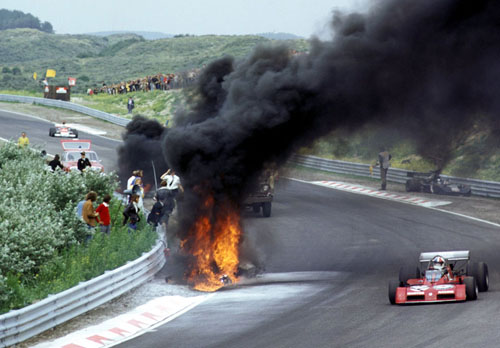 Zandvoort had been extensively modified during its absence from the Grand Prix calendar. For the 1973 race, in an indirect celebration of the efforts put forth, there was a special atmosphere at that weekend and everyone was happy, especially the organizers. But in the eighth lap of the race, Briton Roger Williamson – in only his second ever Formula One race – crashed heavily near Tunnel Oost and was killed after his car caught fire while scraping along the tarmac. The race was won by Tyrrell driver Jackie Stewart (who broke Jim Clark’s record for the most career Grand Prix victories that weekend) and his teammate François Cevert finished 2nd; but no one felt like celebrating; it was one of the darkest moments in the history of the sport. 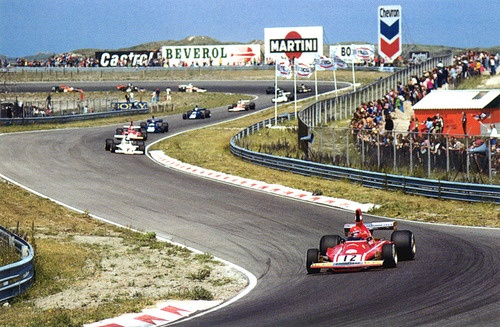 1974 saw the re-emerging Ferrari team dominate with Austrian Niki Lauda winning.
Holland was host to the eighth round, and Lauda took his fourth pole of the year, with teammate Regazzoni alongside, and the McLarens of Fittipaldi and Hailwood next up. Lauda led from the start, will Hailwood jumping up to second. But Regaazzoni took only two laps to regain second, and Hailwood was soon passed by Depailler and Fittipaldi. Depailler held third until he struggled with oversteer, and so Fittipaldi was through. Lauda won, with Regazzoni making it a 1-2 for Ferrari, with Fittipaldi getting third.

1975 – Hunt in his Heskeths leading over Lauda in Ferrari 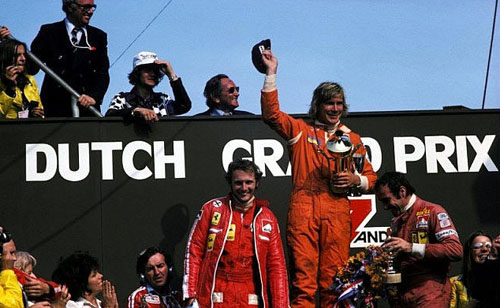 1975 – James Hunt wins ahead of Niki Lauda and Carlos Reutemann

1975 saw Briton James Hunt win his first championship Formula One race in his Hesketh.
Pole went to Lauda, with teammate Regazzoni alongside, and Hunt’s Hesketh third. The race started on a damp track and Lauda took the lead, with Scheckter up to second ahead of Regazzoni. The order was unchanged until the drivers had to pit for dry tyres. Hunt and Jarier pitted early, and their gamble paid off as they were first and second, with Lauda, Scheckter and Regazzoni third, fourth and fifth respectively. Lauda passed Jarier for second midway through the race, and started closing on Hunt. Jarier almost immediately retired with a tyre failure, and Scheckter who inherited third had his engine blow up with just 12 laps left. Hunt held off Lauda to take his first career win, with Regazzoni completing the podium. 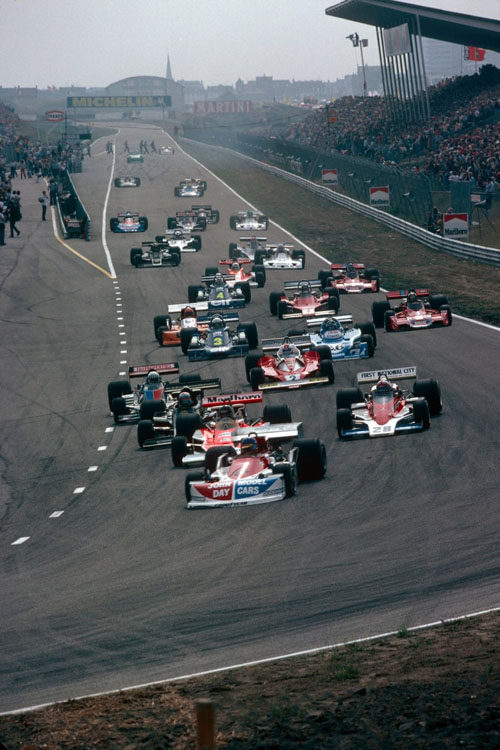 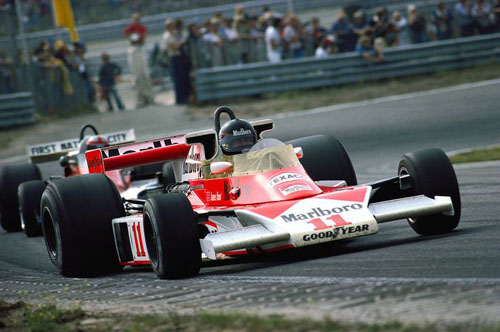 1976 saw Hunt win again while Lauda was recovering from his dreadful crash at the Nürburgring so Ferrari were back in business, but with only one car for Regazzoni. It was Peterson who took pole at Zandvoort, beating pole king Hunt and Tom Pryce’s Shadow. Peterson led the early stages ahead of Watson, until Watson made a mistake which let Hunt through. Peterson then struggled and dropped behind Hunt, Watson and Regazzoni. Watson retired with a gearbox failure, promoting Regazzoni and Peterson, but the latter also retired when he lost oil pressure. Regazzoni now closed up on Hunt, bringing Mario Andretti with him, but Hunt held them off, with Regazzoni and Andretti within two seconds of him in second and third. 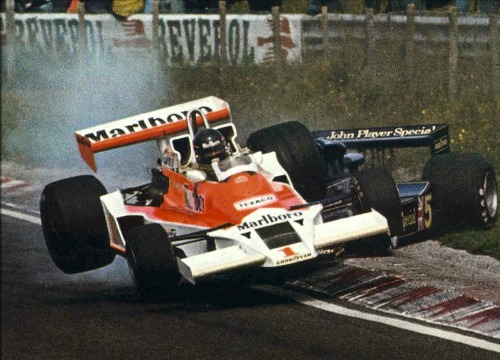 1977 was probably remembered for an incident between Hunt and American Mario Andretti. Andretti attempted ambitiously to pass Hunt at the 180 degree Tarzan corner; the two cars touched and both were out of the race. In qualifying Andretti took his fifth pole of the season with Laffite alongside on the front row, and Hunt third. At the start, Hunt jumped both the front row starters to lead but before the end of the first lap, Andretti tried to drive alongside him but some aggressive defending from Hunt forced him to lift, and Laffite took advantage to get second. Five laps later, Andretti had got back past Laffite and was attack attacking Hunt, who again defended aggressively but this time Andretti did not lift and they collided. Hunt was out on the spot, whereas Andretti spun and rejoined fourth. 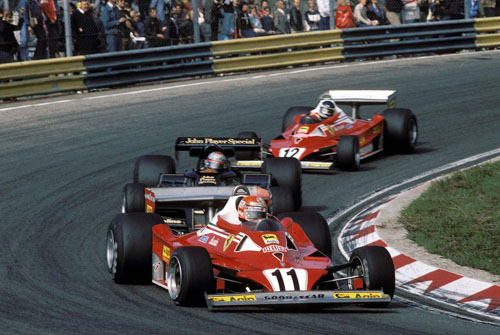 This left Laffite leading from the Ferraris of Lauda and Reutemann. The latter had a long battle with Andretti for third, repeatedly exchanging places, until the Lotus driver’s engine blew up. Soon after, Lauda passed Laffite to take the lead, and he went on build a gap and win comfortably. Laffite finished second. After Andretti’s demise, Reutemann ran third until the second Lotus of Nilsson attacked him, and the two collided with Nilsson out and Reutemann rejoining at the back. This sensationally left Patrick Tambay in the Ensign third, but he ran out of fuel on the last lap, thus handing the place to Scheckter. 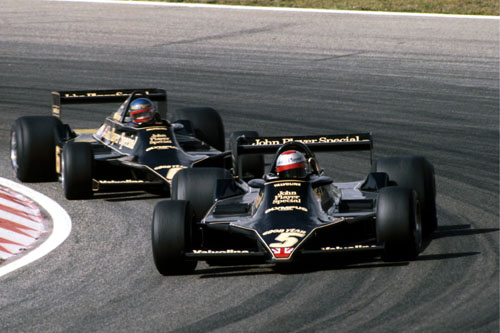 Andretti won the 1978 running after taking pole with Peterson alongside in the all-Lotus front row, and Lauda heading the second row. At the start, Andretti led with Peterson following, whereas Lauda was challenged by Jacques Laffite. The Lotus cars quickly built up a good gap, while Laffite challenged Lauda early on but then began to drop down the order with tyre issues. The race was quite uneventful, and Andretti went to take victory, with Peterson completing another Lotus 1-2 leaving Lauda to take third. This was Andrettis last Formula One victory. 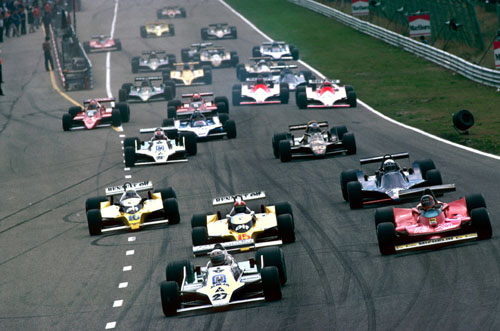 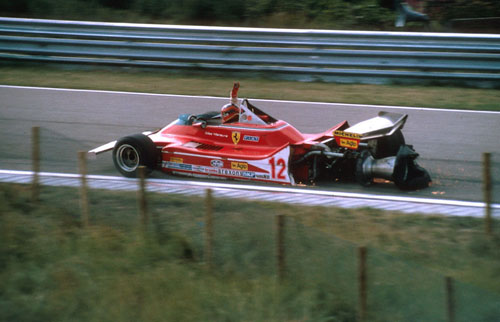 1979 saw a change to the circuit to slow cars coming into Tunnel Oost; there was a high-speed temporary chicane put there. Canadian Gilles Villeneuve had crashed there while battling ferociously with Australian Alan Jones and damaged his left-rear suspension. But he carried on; but on the start of the next lap he went off again at Tarzan. Refusing to give up, Villeneuve, to the shock of many, went into reverse gear and drove his Ferrari out of the muddy run-off area and back onto the circuit. About halfway distance, the car’s left rear rim and wheel with the suspension totally shattered was being dragged by the car as it went along; which made the Ferrari nearly impossible to drive. Villeneuve, displaying his now legendary car control, made it back to the pits without crashing or going off and retired from the race; the Grand Prix was won by Jones. 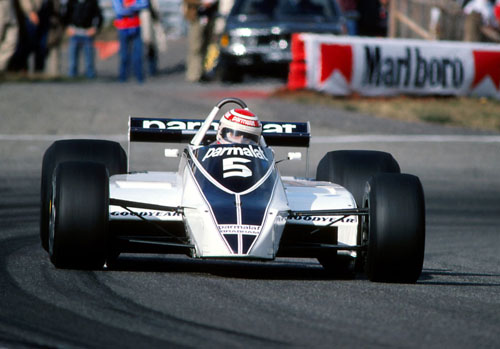 1980 saw the chicane removed and was replaced by a slower chicane before Tunnel Oost. 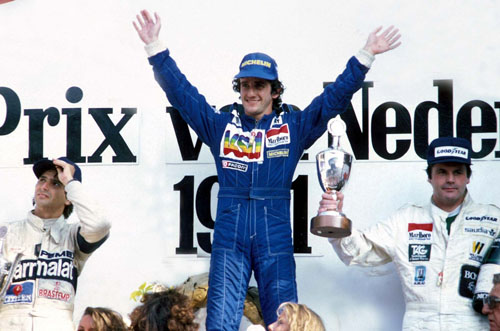 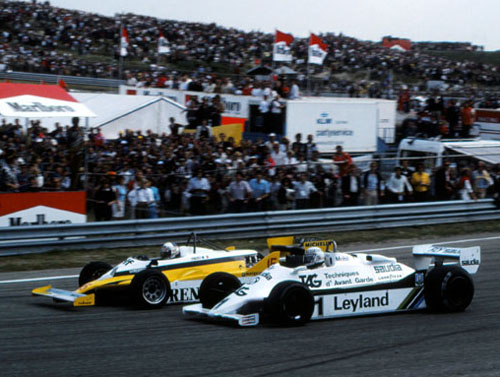 1981 saw a big battle between Frenchman Alain Prost in a Renault and Jones in a Williams; Prost came out on top to win. 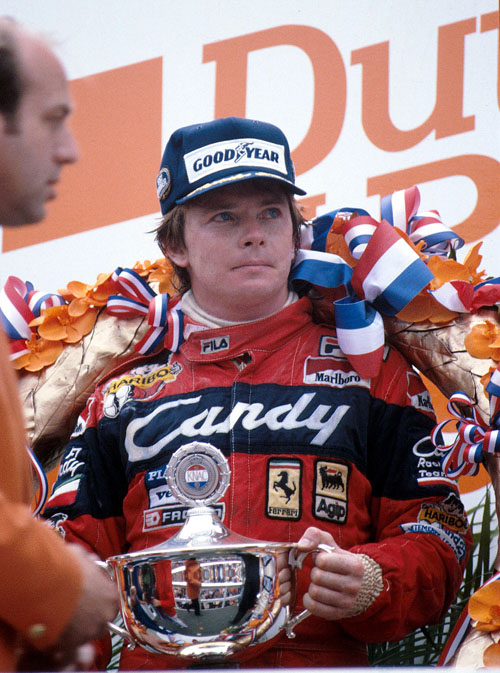 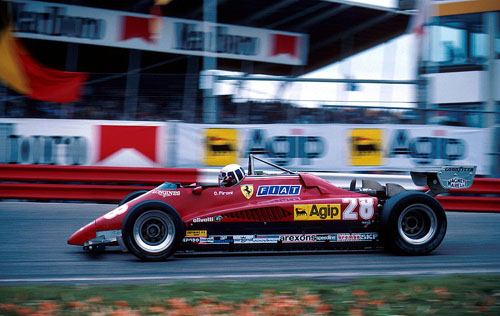 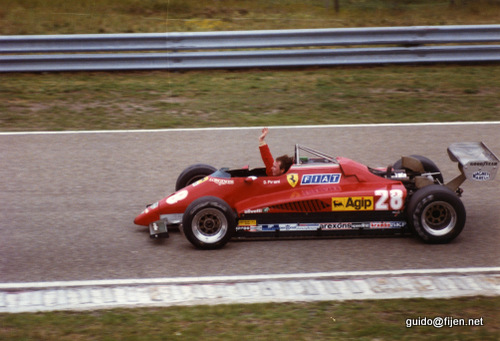 The 1982 event was won by Frenchman Didier Pironi in a Ferrari; his countryman René Arnoux had a dreadful crash at the end of the pit straight going into Tarzan; his front suspension failed on his ground-effect Renault and he went head on into the barriers; fortunately he was uninjured.
(More on the 1982 Dutch Grand Prix…) 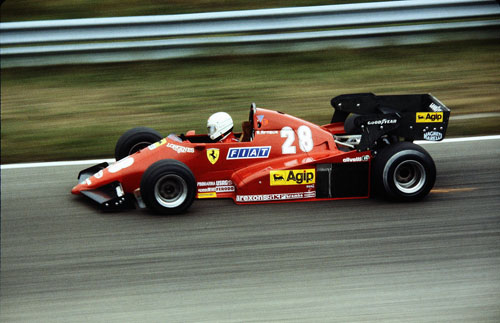 1983 saw a battle between championship contenders Prost and Brazilian Nelson Piquet. Prost attempted to pass Piquet at Tarzan but the Frenchman punted Piquet off and Prost crashed soon afterwards. Rene Arnoux got his final F1 victory here at Zandvoort. 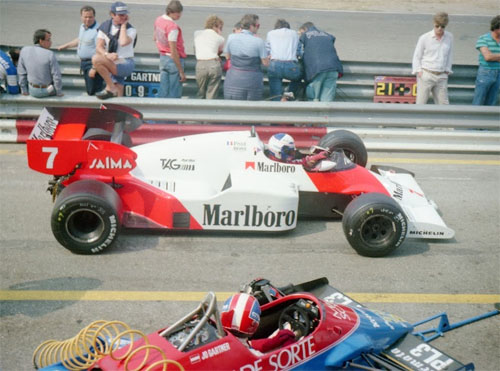 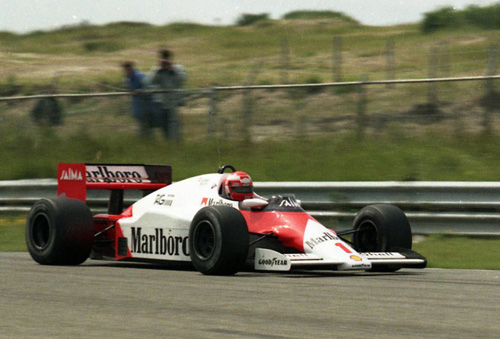 1985 saw Lauda take his 25th and final Grand Prix victory while holding off his charging McLaren teammate Prost near the end of the race. 1985 was the race’s final running, as the company that ran the circuit (CENAV) went out of business, marking the end of the old Zandvoort circuit. The track was eventually redesigned and is still used for other disciplines of motorsport.
(More on the 1985 Dutch Grand Prix…)