One of the nicest combinations man can dream off….

Now there is an another combination to dream for: 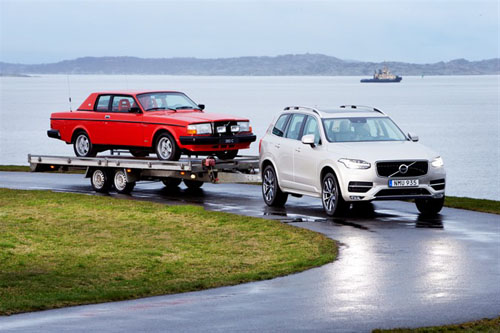 Volvo Cars will be exhibiting five cars with a link to Bertone, the Italian car designer, at the massive vintage and classic car show in the German city of Essen on 15th April 2015.

In the course of its 88-year-long history, Volvo Cars has turned to Italy on a number of occasions for inspiration and help with various models. In the mid-1970s, it entered a long and rewarding partnership with Bertone, the Italian car body and design company.

Bertone’s production line was suited for small-scale manufacture of exclusive models, which was ideal for Volvo when it wanted to produce two special versions of the 200 series. These were the 264 TE limousine which appeared in 1975, and the 262C coupé which was unveiled in 1977. The cars were designed in Sweden but adapted for production and built in Turin by Bertone.

The Techno Classica Essen show, held on 15th to 19th April, spans 20 exhibition halls, attracts about 200,000 visitors each year and is by far the largest event of its kind in Europe. The exhibition reflects the enormous and growing interest in classic cars.

“It is a given for a car manufacturer with such a long and exciting history as Volvo Cars to appear at Techno Classica”, said Per-Åke Fröberg, head of Volvo cars Heritage, and continued: “It is more important than ever to draw on history and look to the future at the same time.”

This will be Volvo Cars’ twelfth appearance at Techno Classica, where it will be showcasing five cars, all with a Bertone connection.

This red Volvo 262C was specially commissioned by Pehr G Gyllenhammar, CEO and President of Volvo from 1971 until 1993. The charismatic head of Volvo wanted his cars to be red and, although this was not a standard colour for Volvo cars, he naturally got his wish. Even the lavish leather interiors are red. Today, the car belongs to the Volvo Museum.