Konserthuset at Götaplatsen in Göteborg 🇸🇪

The main auditorium’s plain shaped walls are clad in yellowish-red maple veneer and there are 1,300 seats. There is also a smaller concert hall, Stenhammarsalen, for chamber concerts. The acoustic qualities of Gothenburg Concert Hall have given it a reputation well outside the Swedish borders; Deutsche Grammophon has used the Concert Hall as a studio for a number of records, for example.

A number of progressive rock bands (among others Yes and Roxy Music) have also performed at the Gothenburg Concert Hall.

The Concert Hall is the home stage of the Gothenburg Symphony. 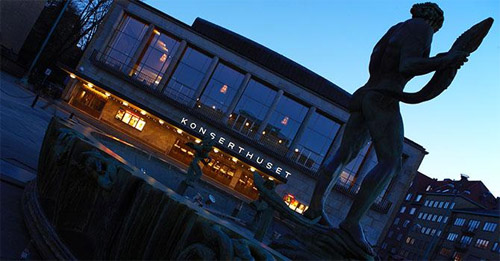 Götaplatsen is a public square in Gothenburg, Sweden, at the southern end of Avenyn, the city’s main boulevard. The square was inaugurated when Gothenburg held a major international industrial exhibition, 1923, celebrating the city’s 300th anniversary.

Götaplatsen is Gothenburg’s cultural hub, enclosed by the Gothenburg Concert Hall (where the Gothenburg Symphony Orchestra resides), the Gothenburg Museum of Art, the Gothenburg City Theatre and the City Library. At the centre of the square presides the Poseidon statue by Carl Milles—the statue has become one of the symbols of the city. On the city’s annual culture festival different Swedish musical artists usually perform free at the square, bands like Hardcore Superstar, Mustasch and Teddybears have all performed at this occasion.