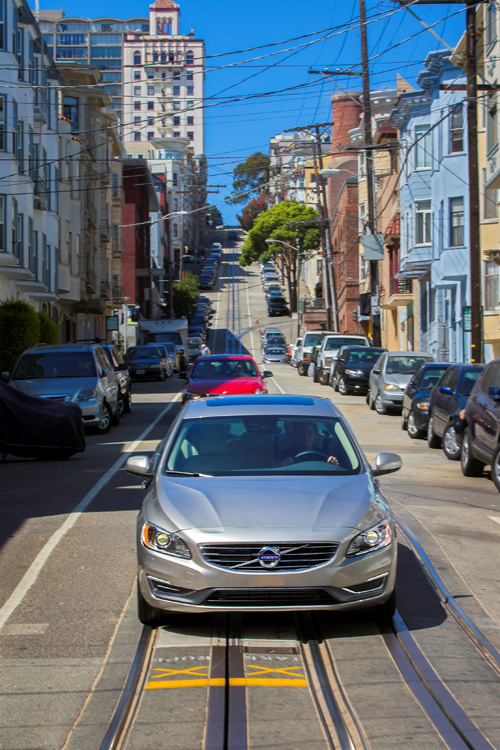 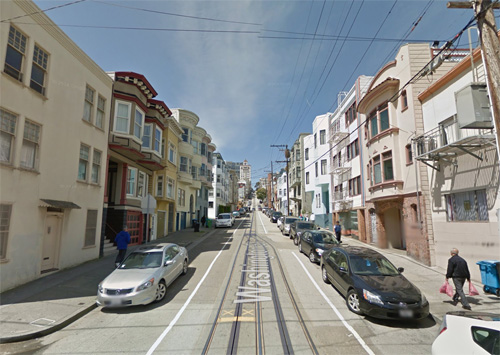 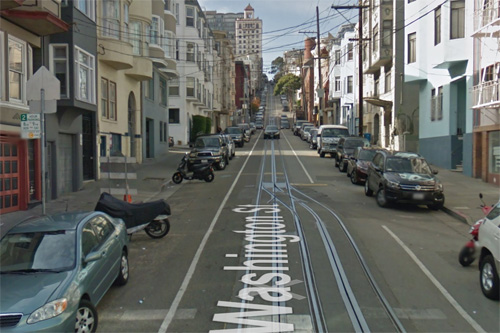 Washington St near Powell St in San Francisco is one of the steepest streets, with a cable car running through it.

At the corner of Washington St and Powell St you will find the Cable Car Corner, a good startpoint for your cable car tour.

The San Francisco cable car system is the world’s last manually operated cable car system. An icon of San Francisco, the cable car system forms part of the intermodal urban transport network operated by the San Francisco Municipal Railway. Of the twenty-three lines established between 1873 and 1890, three remain (one of which combines parts of two earlier lines): two routes from downtown near Union Square to Fisherman’s Wharf, and a third route along California Street. While the cable cars are used to a certain extent by commuters, the vast majority of their 7 million annual passengers are tourists. They are among the most significant tourist attractions in the city, along with Alcatraz Island, the Golden Gate Bridge, and Fisherman’s Wharf. The cable cars are listed on the National Register of Historic Places.

The cable cars are not to be confused with San Francisco’s heritage streetcars, which operate on Market Street and the Embarcadero.

Close by you will find tha Cable Car Museum, the Cable Car Museum is a free museum in the Nob Hill neighborhood of San Francisco, California. Located at 1201 Mason Street, it contains historical and explanatory exhibits on the San Francisco cable car system, which can itself be regarded as a working museum.

The museum contains several examples of old cable cars, together with smaller exhibits and a shop. The cable cars displayed include:

Exterior of the Ferries and Cliff House Railway Co. Building Constructed in 1887. Houses both the cable car winding station, engines, and museum. The smoke stack in the rear was damaged in the 1906 San Francisco earthquake, restored then soon decommissioned when steam power was replaced with electrical power at the winding station.
The museum is part of the complex that also houses the cable car power house, which drives the cables, and the car depot (“barn”). The car depot is not accessible, but two overlook galleries allow the visitor to view the power house, and to descend below the junction of Washington and Mason streets in order to view the large cavern where the haulage cables are routed via large sheaves out to the street.

The museum was established in 1974, and is run by the Friends of the Cable Car Museum. It is entered from an entrance at Washington and Mason and is open from 10 AM to 6 PM between April 1 and September 30 and from 10 AM to 5 PM between October 1 and March 31, apart from some public holidays. 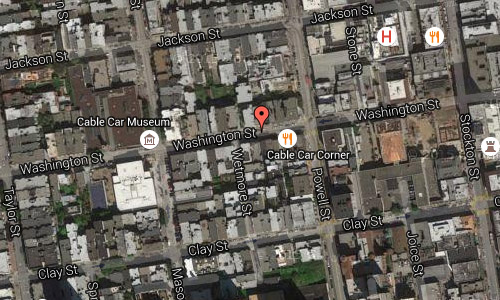