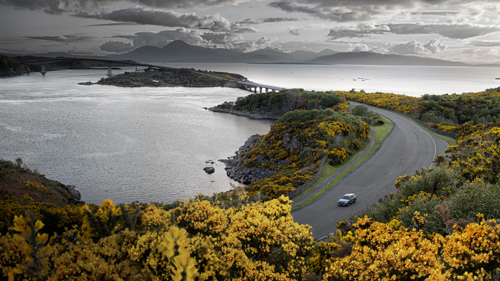 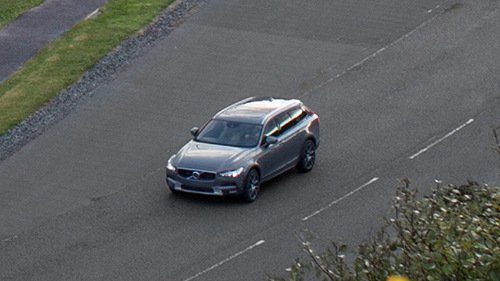 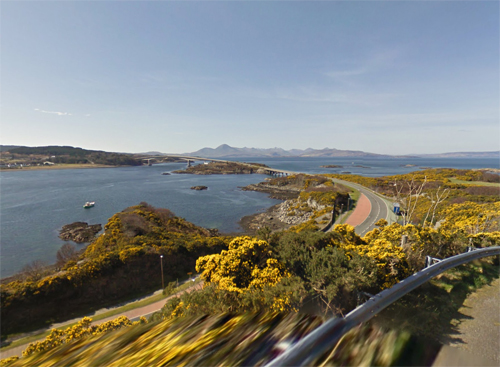 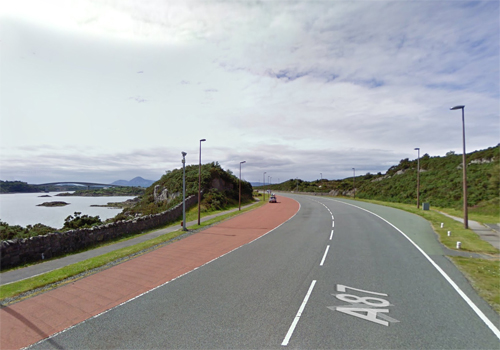 2016 – Skye Bridge at Kyle Of Lochalsh, seen from A87 in Kyle (Google Streetview)

he Skye Bridge is a road bridge over Loch Alsh, Scotland, connecting the Isle of Skye to the island of Eilean Bàn. The name is also used for the whole Skye Crossing, which further connects Eilean Bàn to the mainland across the Carrich Viaduct. The crossing forms part of the A87.

Traditionally, the usual route from the mainland to Skye was the shortest crossing, with a length of around 500 metres, across the sound between the villages of Kyle of Lochalsh on the mainland and Kyleakin on the island’s east coast. A ferry service operated from around 1600, run by private operators and latterly by Caledonian MacBrayne.

Road and rail connections to Kyle of Lochalsh were constructed towards the end of the 19th century and various parties proposed building a bridge to the island. Although the engineering task was well within the capability of the age (the crossing is shorter and shallower than that bridged by the Forth Bridge), the island’s remoteness and small population meant that the cost could not be justified.

Increased prosperity in the islands and a healthy summertime tourist traffic led to ever increasing volumes of traffic queueing for the ferries. This brought renewed calls for the construction of a road bridge. In 1989 Conservative junior minister James Douglas-Hamilton announced a bidding round, requested tenders to construct a toll bridge. A variety of locations and designs were proposed, and the contract was awarded to Miller-Dywidag, a consortium composed of Scottish construction company Miller Construction, German engineering company DYWIDAG Systems International, and financial partner the Bank of America. The Miller-Dywidag proposal (designed in collaboration with civil engineering firm Arup) was for a single-span concrete arch, supported by two piers resting on caissons in the loch and using Eilean Bàn as a stepping-stone. The PFI plan was accepted, and received support from local MP Charles Kennedy and the local council in the full knowledge that it would be on a high-toll basis for a limited period. Although the bridge itself was built with PFI, the approach roads were the responsibility of the Scottish Office, which paid £15 million for the roads and associated improvements, and to cover the costs associated with decommissioning the ferry. Construction began in 1992 and the bridge was opened by Secretary of State for Scotland Michael Forsyth on 16 October 1995. Then the ferry service ceased, and the bridge and the Mallaig — Armadale ferry were the only year-round connections to the mainland.

The two caissons that the main span stands on were cast as hollow cylinders in the old Kishorn Dry Dock and floated to site where they were sunk onto the prepared loch bed. Kishorn Dock had been built for the oil industry, but only built the one rig – Ninian Central. 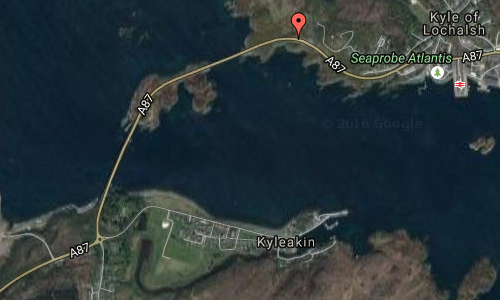 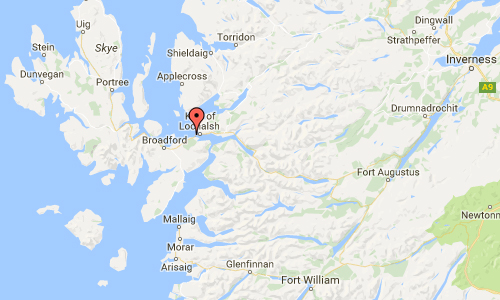 More information at en.wikipedia.org and /www.lochalsh.com.