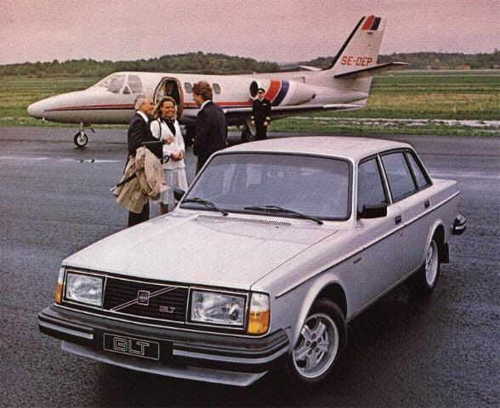 1980 – Volvo 244 GLT at Göteborg City Airport or Säve Flygplats in Göteborg. The pilot standing near the plane was Captain Hellberg 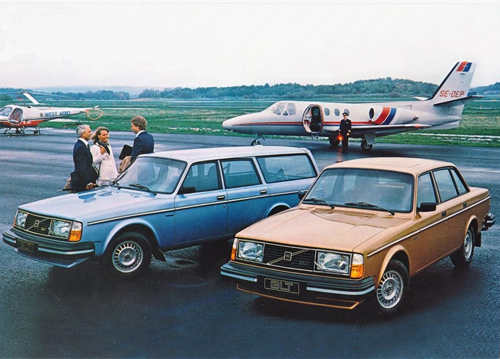 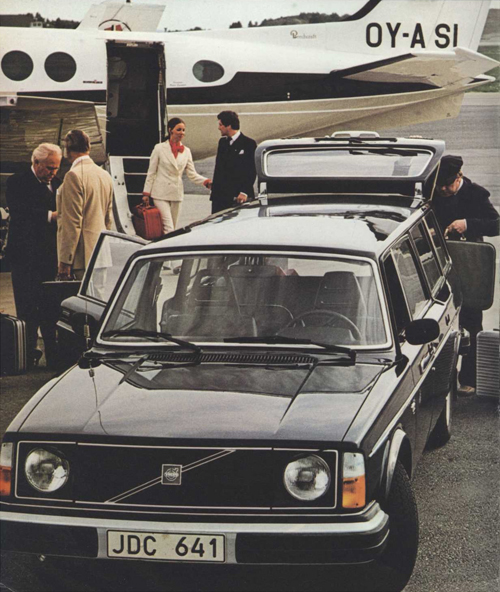 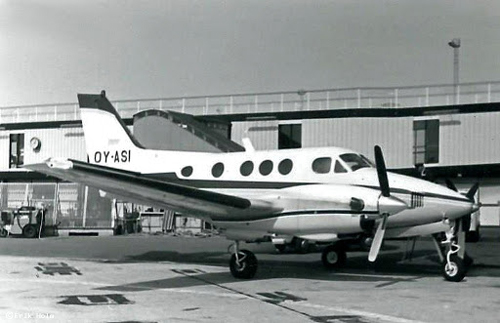 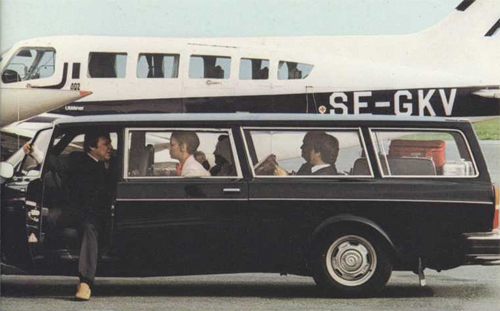 1969 – Volvo Raketen or P1800 Prototype The Rocket at Säve flygplats

Volvo had in some of the hangars stored a large collection of old Volvo cars and trucks.

1990 – Volvo’s collection of historic vehicles stood in a hangar at Säve Airport from the beginning of the 1980s until 1995 when the current Volvo Museum in Arendal opened.

With the opening of the Volvo Museum in Arendal, Volvo moved most of the cars and trucks away from the hangars at Säve airport.

In 1963, Volvo’s customer magazine Ratten reported that the company had compiled a complete collection of the car models manufactured during the company’s first 25 years. It was about fifteen vehicles. Among other things, several rarities that no longer remain in Volvo’s ownership include an unusual PV657 Ambulance and an LV70 Fire Truck from 1931.

During the inauguration of the new factory in Torslanda in 1964, King Gustav VI Adolf and Gustaf Larson – one of Volvo’s founders – were driven in a Volvo ÖV4 that was borrowed by a private person, because the company did not then own a copy of the convertible.

However, during the rest of the 1960s and a bit into the 1970s, building a museum was not a priority issue within the Volvo Group.

In the mid-1970s, the collection stood in the so-called “Blue Hangar” at Torslanda airport. It was then about 5-6 vehicles but only two of them must have been drivable. A few other vehicles were scattered on Volvo’s premises around the country. Unfortunately, the hangar burned down after only a few years, however, most of the vehicles managed to recover from damage.

For a few years they were placed in temporary premises, but from the beginning of the 1980s the collection was in a hangar at Säve airport in the middle of Hisingen. Around this time, the vehicles began to be properly maintained and new ones purchased.

In the early 1990s, the collection was expanded with a large number of rarities. The company bought from Charlie the former importer in Belgium, Charlie Mannerie, a large collection of Volvo cars. They were a cross-section of models – from the 1920s to the 1980s.

In the mid-1990s, the Volvo collection gained a permanent place with the opening of the Volvo Museum in Arendal on Hisingen on May 30, 1995. From the beginning, only a few buses and trucks were included, while the passenger car collection was larger with about 40 carriages from the start.

Ten year after the opening, there were about 75 passenger cars, just over twenty trucks, buses and construction machinery, thirty or so marine and industrial engines and two aircraft – the Dragon and the Viggen – at the museum. All parts of the Volvo Group and Volvo Cars’ products are well represented.

After the takeover by the Amercans, Ford had continued to support the Volvo Museum after the takeover of Volvo Cars. For example, the last C70 Convertible was delivered directly from the Uddevalla factory here just a few months ago, former director Heinz says.

Heinz looks positively on the future of the Volvo Museum.
– There is a saying in the automotive industry. Anyone who has no history has no future either. It is an expression that is perhaps more relevant today than ever before, concludes Heinz Linninger.
The museum today has an area of ​​3500 square meters.

Göteborg City Airport, formerly (and still informally) known as Säve Flygplats, is an airport located 5 NM (9.3 km; 5.8 mi) north-west from the centre of Göteborg on the island of Hisingen, Bohuslän, Sweden. It is located within the borders of Göteborg Municipality, hence its name. It was Göteborg’s second international airport, with international scheduled flights from 2001 to 2015. In addition to commercial airlines, the airport was also used by a number of rescue services, including the Swedish Coast Guard.

Owing to damage to the airport’s runway by heavy aircraft and the high cost of repairs, the airport was closed to airline traffic indefinitely on 18 January 2015, but remains open to light aircraft.

Although it was primarily a low-cost airline airport, it is actually located closer to Göteborg city centre than the main Göteborg Landvetter Airport, even if the driving time is around the same. It was one of the few city airports to receive Ryanair flights. Göteborg City Airport was able to handle aircraft up to the size of a Boeing 767, an Airbus A320, or similar jets. The airport still accommodates general aviation activities, including two flying clubs, Aeroklubben i Göteborg and Chalmers flygklubb.

Construction of the airport began in 1940, as a military airbase for F 9 Säve, a wing of the Swedish Air Force. The airbase was closed down in 1969. The old civil airport at Torslanda (about 10 km south of Säve) was closed down in 1977, and scheduled flights moved to Landvetter Airport; general aviation activities were moved to Säve. In 1984 the runway was improved and extended, to allow larger business jets to operate.

Initial plans were for the airport to remain closed to heavy aircraft until at least the end of January 2015. However on 13 January 2015, the decision was published to close the airport permanently to passenger traffic, owing to the high cost of fixing the runway/taxiway problem. Sparrow Aviation, using lighter aircraft, continued to use City Airport until 18 January 2015.

The airport was kept open until the end of 2015 in the hope of attracting a possible buyer who could agree to Swedavia’s conditions and ensure a long-term plan.

In May 2016 it was announced that a motorsport circuit would be built at the Säve airport, intended to host Scandinavian Touring Car Championship (STCC) races.

Owing to the aforementioned issues, there is no longer any passenger traffic scheduled. All airlines relocated to Göteborg Landvetter Airport, except Sparrow Aviation which terminated its Gothenburg-Stockholm Bromma Airport flights.

More information at www.serneke.se and en.wikipedia.org.

Thanks to Per Richardsson for finding this Volvo Photo Location!