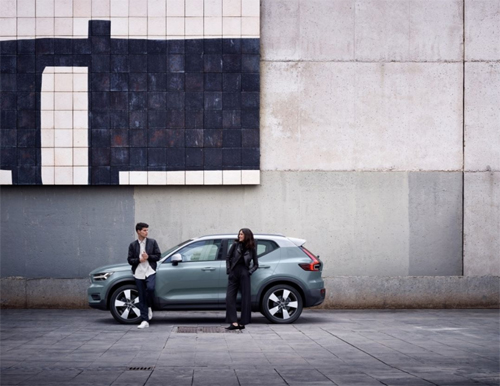 The art work on the wall behind the XC40 is from Eduardo Chillida and it is called MURAL G-333. 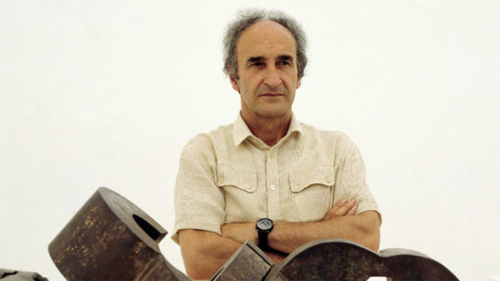 With over forty projects in cities around the world, Eduardo Chillida’s public sculpture has played a fundamental role in his artistic career. The artist always defended it as a mechanism for guaranteeing universal access to art. Chillida made Barcelona, Mural G-333 in 1998, three years after the opening of the building that hosts MACBA and four years before his death. In all his public interventions, location was of the utmost importance. During his visit to Barcelona to supervise the installation of the work, he explained that when he saw the Museum for the first time he thought the area around Richard Meier’s white building had a weak point: the dividing wall to one side of the building separating the Museum from the rest of the area. He thought it didn’t integrate the Museum with the neighbourhood. For that reason, on being asked to produce a work for the outside of the building he decided to create a ceramic mural for this concrete wall and place it three-metres high. Barcelona, Mural G-333 is the first large ceramic mural made by the artist during his long career. 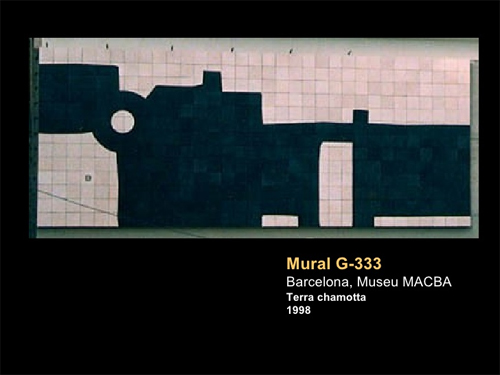 The work was produced at the studio of Hans Spinner – a German ceramicist highly regarded by Chillida – in Grasse, in the South of France, where the sculptor had made most of his ceramic pieces. After firing the plaques of refractory concrete that make up the mural at 1,300 degrees centigrade, Chillida painted them in copper rust and fired them again at 1,120 degrees. During this double-firing process the rust acquired a characteristic black colour and a texture half-way between sculpture and engraving. The way Chillida uses clay and other materials that can be fired does not correspond to the traditional concept of ceramics; it is more of an architectural essay. 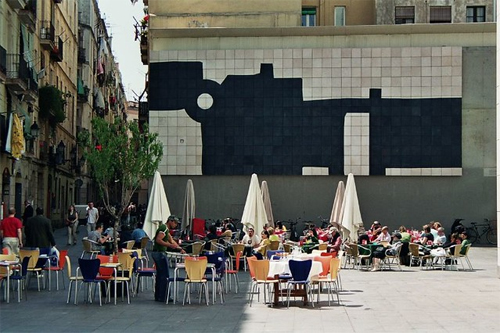 Chillida’s mural for MACBA encapsulates the sculptor’s own language and his concept of abstraction. Simplicity is at the core of a way of understanding art that eliminates all the superfluous and rhetorical elements of the image. In Barcelona, Mural G-333, as in all of Chillida’s work, there is a modulation of space and a game of relations between the full and the void, a void that often becomes sign. The drawing in the mural follows the typology of the artist’s late work, in which the power of the dark graphic motif and the black chromatic delimitations reflect the artist’s concern with volume and its occupation of space. Octavio Paz, an expert on Chillida, said that whether the sculptor worked in clay, iron, wood, concrete, alabaster or any other material, ‘they all say the same thing: space’.

More information at macba.cat and en.wikipedia.org.