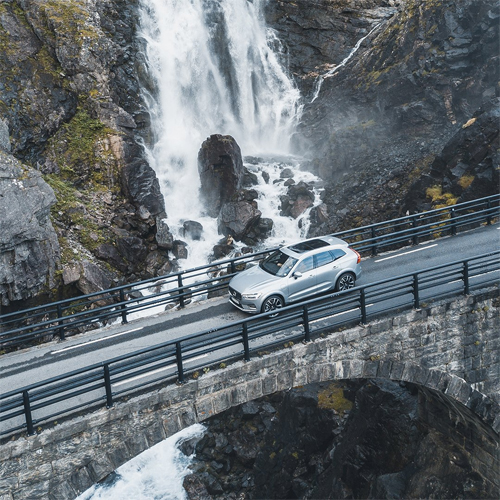 2019 – Volvo XC60 at Stigfossbrua on Trollstigen in Åndalsnes, Norway 🇳🇴.

2006 – Volvo S60 at Stigfossbrua on Trollstigen in Åndalsnes Norway

2006 – Volvo S60 at Stigfossbrua on Trollstigen in Åndalsnes Norway

Stigfossbrua or the Stigfoss Bridge is a bridge over the Stigfoss waterfall in Trollstigen. County Road 63 crosses the bridge. The bridge and the road were opened by King Haakon VII July 31, 1936. Work on the bridge began in 1933, and the brickwork was completed in 1934 and 1935. The “Stigfoss Bridge 1935” is embossed into one of the stave stones.

Stigfossen is the 85th highest waterfall in Norway based on a total fall with a height of 235 meters . He lies at the Trollstigen in Rauma municipality in Møre og Romsdal county. The waterfall is slightly lower than the nearby Trollfossen waterfall, but has greater water flow. County Road 63 crosses the bridge over the lower end of the falls, while Kløvstien and the older footpath cross the river further down the valley bottom. Stigfossen is part of the protected watercourse Istra, a tributary to Rauma.

Trollstigen is the most famous road in Norway and is one of the touristic highlights of Norway. Trollstigen means Troll’s ladder and is also called the troll route. The road has 11 hairpin curves and an elevation of approximately 850 meter. The road is only open in summertime!Information about the opening and closing dates can be found on the website of nasjonaleturistveger. Driving down the road (or up) leads you along two waterfalls. Stigfossen is the biggest waterfall and is the one seeing first.

At the top is a viewing platform, Trollstigheim called, where you have a beautiful view on the road and the waterfalls Stigfossen and Trollfossen. There is also a restaurant, toilets and a tourist shop at the big parking. Last time I as at Stigfossen the weather wasn’t so good and the top of Stigfossen was covered with clouds. I was quit disappointed but clouds can also add something to pictures.

Stigfossen is an unregulated and powerful waterfall with a total height of 240 meter, from which 180 meter is almost a single drop. The river Istra is being fed with melted snow and ice from the Meiadalen. When driving through the valley you see a lot of water falling down of the mountains. There are several small glaciers and mountaintops of 1.500 meter or higher. A lot of this water ends in two lakes called Bispesvatnet and Alnesvatnet that are the major suppliers for the quit respectable volume of Stigfossen. When I was at Stigfossen July 2017 I made some pictures of waterfalls in the Meiadalen and was surprised that these waterfalls had no name.

Best time to visit Stigfossen is early summer in the morning. I always like the first sunburst when they just rise above the mountain wall. The disadvantage is that the sun is right above Trollfossen with a lot of backlight.

It is hard to say what the best viewpoint are. Just begin on the top and drive down to the bridge over the river Istra. There are some small spots where you can stop but many other people want to do the same thing. A little bit further down (in a hairpin) you will have a great view on Stigfossen and Stigfoss brua (bridge). The bridge is built in 1935 and is quit remarkable. Take a picture when a car is crossing the bridge, then you see how impressive Stigfossen is.

At the end of Trollstigen there is a parking where you can see Stigfossen and Trollfossen completely and together. There is also an information board with hiking trails. There is a trail Klovstien that leads up Trollstigen, a quit demanding hike but very beautiful.

Trollstigen is part of road 63 in near Åndalsnes (Rauma Municipality, Møre og Romsdal county) and is about 20 km long. It is a popular tourist road with eleven hairpin bends. The road was opened on July 31, 1936 by King Haakon VII after a construction period of eight years. Originally it was a very narrow road where cars hardly could pass. After improvements, the last years, it has become a good motorable road but is still forbidden for long vehicles. In the winter months Trollstigen is closed. Even in springtime, the Trollstigen can be closed in morning due to frost.

Trollfossen is an unofficial named waterfall but is also an impressing waterfall, although the stream of the watercourse is less powerful. Again the best view on the Trolfossen is when driving down the Trollstigen. Trollstigen is the fall east of the Stigfossen. The river Tverelva drops down over 280 meter (probably more) and ends in the river Istra.

Thank you Johannes for finding this location!