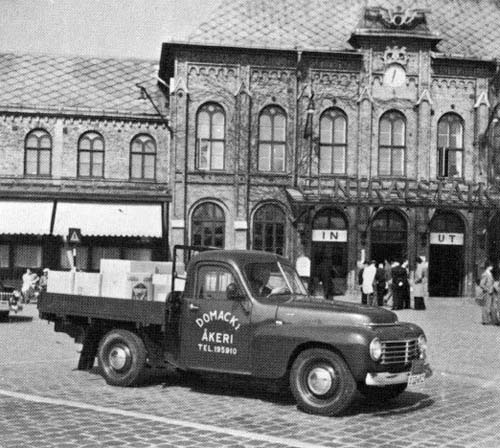 1950 – Volvo P 445 A by Floda at Central Station on Drottningtorget in Göteborg, Sweden 🇸🇪.

Numerous of railways were built across Sweden in the 19th century. One of the first distances was the one between Göteborg and Jonsered. As the railway grew more popular, the need for a station emerged. The Göteborg Central Station was built between the years of 1856-1858. The architect in charge was Adolf Wilhelm Edelsvärd.

Some reconstructions have been made to the station since its opening in 1858. In 1923 a fire destroyed parts of the station, so the interior had to be rebuilt. The current interior design is similar to the 1923 model with wood pillars, glass ceiling and a floor made of limestone.

During the 19th and early 20th century about one million Swedish emigrants passed the station in order to get to the harbour. Their final destination would be America.