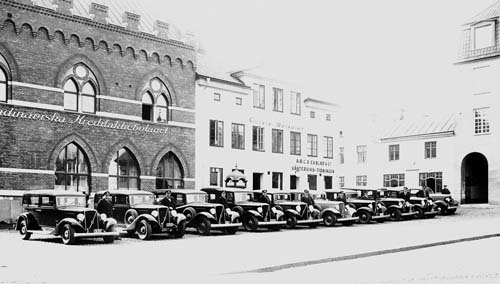 Västervik was first mentioned in 1275. The town was then located at the current location of Gamleby. In 1433 Eric of Pomerania decided to give it a charter and move it to its current strategically important location, close to the castle of Stegeholm. In the ensuing centuries Västervik suffered attacks from hostile armies. It was more or less completely destroyed five times between 1450 and 1677. Despite this, king Gustav Vasa established a ship industry here in the 16th century, from which ships sailed to Germany and the Baltic countries, and from the 17th century they sailed to Portugal too. In the 18th century a long period of peace allowed the ship industry to expand, increasing the ship routes down to the Mediterranean Sea.

Every year since 1966 there is a folk music festival in Västervik, at the ruins of the Stegeholm castle. The city still bases much of its industry on its harbour, and on the industries that were established as a result of it in the late 19th century. Recently, however, Västervik has suffered the closure of certain factories, notably Electrolux, with associated job losses. Being a summer town popular with yachtspeople, campers, daytrippers, and returning former residents, Västervik experiences an annual revival in July. Just outside Västervik, there is the static inverter of HVDC Gotland and Fårhultsmasten, a 335 m tall guyed mast used for FM/TV-transmission, which shares with three other masts the title of Sweden’s tallest structure.

The newspaper Västerviks Tidning is still being published today and is part of Norrköpings Tidningar. Skandinaviska Kreditaktiebolaget is today part of SEB.