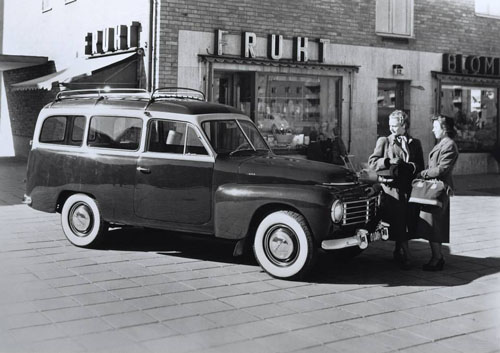 Bjurslätts Torg is a place in Tolered in the Lundby area on Hisingen in Göteborg.

In 1949 a town plan for the area around Bjurslätt torg was made by Tage William-Olsson and it was built during the years 1950-1952. Architects of the center facility was Nils Einar Eriksson and Erik Ragndal. It consists of three angle-built three-story longhouses and a tower block on nine floors. The frukt (fruits) store on the photo was located in one of these towers.

Tage William-Olsson (8 June 1888 – 22 August 1960) was a Swedish architect and chief town planning architect of Göteborg. William-Olsson was born in London and was the creator of the important infrastructure-project, the traffic-roundabout Slussen in Stockholm.

Nils Einar Eriksson (19 juli 1899 (Stockholm)- 1978 (Göteborg), was a Swedish functionalist architect (funkisarkitekt) and has also been responsible for the Göteborgs konserthus.

Karl Albert Staaff (21 January 1860 – 4 October 1915) was a Swedish liberal politician and lawyer. He was chairman of the Liberal Coalition Party (1907–1915) and served twice as Prime Minister of Sweden (1905–1906 and 1911–1914). The contemporary Swedish Liberal party The Liberals counts him as the first among the more prominent leaders of Swedish 20th century liberalism, followed by such parliamentarians as Nils Edén, Carl Ekman, Nobel Prize laureate Bertil Ohlin, Gunnar Helén, Per Ahlmark and Bengt Westerberg.