The Swedish Cyprus Expedition was a project to systematically investigate the archaeology of the early history of Cyprus. It took place between September 1927 and March 1931 and was led by three archaeologists Einar Gjerstad, Erik Sjöqvist, Alfred Westholm and architect / photographer John Lindros.

Archaeological excavations were made at various locations in Cyprus including Lapithos, Nitovikla, Ajia Irini and Enkomi. The results were published in four volumes from 1934 to 1972. Most of the finds are now kept at the Cyprus Museum in Nicosia and Medelhavsmuseet in Stockholm. 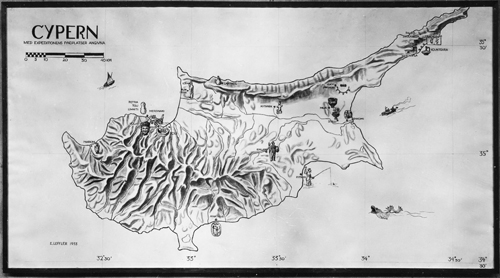 In total, 30 sites and 375 graves were excavated. The Expedition’s Cypriotic driver and assistant, Tooulis Souidos, followed the expedition to Sweden where he continued to work with the Cyprus collections.

Einar Gjerstad had in two rounds between 1923-1924 conducted preliminary archaeological surveys in Cyprus, which resulted in the dissertation Studies on Prehistoric Cyprus, 1926. The following year, in 1927, Gjerstad proposed that a more extensive archaeological project, with Cyprus as a research area, should be organized . On the initiative of Gjerstad, the so-called Swedish Cypriot Committee was formed the same year, with the purpose of organizing an archaeological expedition to the Mediterranean Sea, as well as financially supporting the expedition in the field.

Gjerstad was also allowed to borrow one of the first Volvo cars in production, a Volvo ÖV4. The car was probably number three in the series called ‘Jacob’, and was delivered in 1927. The Volvo performed overwhelmingly well and was able to be carried on Cyprus’s rugged donkey roads in a breathtaking speed of 60 km/h. The automobile Jacob probably meant a lot for the efficiency of the expeditions work. On old films, you see how tall statues in terracotta shake and rumble on the Volvo’s backseat during different transports. In front of larger expeditions to different parts of the island, the car was so packed with supplies that it barely could be seen under tents, camera equipment, suitcases, etc. Where the Volvo could not be used, there used camels and donkeys.

The main purpose of the expedition was to investigate and, in the long run, gain increased knowledge of ancient Cyprus’s archeology and history from rock age through late Roman times, a period of more than fifty thousand years. In order to achieve this purpose, the expedition was organized as a highly flexible and moving company, with the whole of Cyprus as its research area.

In September 1927, the expedition departed from Stockholm. They were invited by Sweden’s consul in Cyprus.

Lapithos (autumn 1927-spring 1928)
In northern Cyprus lies the village of Lapithos. Near this place is a large burial place from the Bronze Age (about 2000-1800 BC) with hundreds of graves. The expedition’s excavations here 1927-28 resulted in lots of ceramics and weapons in copper and bronze.

Volvo ÖV4 on a small road in Kythrea

Enkomi (June-July 1930)
The big city of Enkomi in eastern Cyprus was an important metropolis during the late Bronze Age with copper workshops, craft quarters and sanctuaries. Here, a necropolis with rich graves from the late Bronze Age (1200s BC) was examined with gold, silver and ivory objects, as well as hundreds of vases. The tombs were under the houses, which were dug out later by Cypriot and French archaeologists.

Kition (October 1929-April 1930)
The Swedish Cyprus Expedition’s excavations in Kition began in October 1929 and continued until April 1930, with a break during the winter season.

Ajia Irini (November 1929)
Many important archaeological sites have been identified by excavators. The cult spot at Ajia Irini on the northwestern coast of Cyprus was one such. During the summer of 1929 the expedition received a visit by a priest, Papa Prokopius. He had erupted a thief digger on his belongings by the village of Ajia Irini. The priest decided to transfer the excavation right to the Swedish archaeologists. The place proved to be an unspoiled sanctuary used more or less continuously since about 1200 BC. But the most important period and most finds are dating to about 650-500 BC. An army of terracotta figures hid half a meter below the sandy soil. The 2000 figures lay and stood, grouped in the form of a semicircle, much like a theater. There were clergy, warriors and ordinary Cypriots. Most statues are a couple of decimeters high or less. Many carry offerings, dance or play musical instruments to the glory of God. However, several statues are of natural size. Impressive is the so-called sacrifice priest, wearing long clothes and turban. According to the excavators, he should have kept a sacrificial knife in his raised left hand. Models of tanks with horses, multiple-figure bulls symbolize God’s male power and fertility.

Vouni
The ancient wall of Vouní on the castle cliff (Vounó means mountain in Greek) 270 meters above sea level on the northwestern coast of Cyprus, overlooking Petra, is the site of a monumental palace. The palace was used for more than a hundred years and was rebuilt several times during the 500 / 400s BC. The architects were influenced by both oriental and Greek architecture. There are no sources or fresh water at Vouní, but in the middle of the big palace there was a large cistern where rainwater from the roof could accumulate. One of the items found here during the Swedish Cyprus Expedition in 1928 was the Vouni head. It has the typical archaic smile, is easily triangular and with a characteristic calathosis in the hair. A kalathos is a kind of diadem with different motifs. Vouni heads diadem consists of dancing figures and rosettes. This smile is useful for dating and places the sculpture at about 600-500 BC. The Vouni head is also one of the more central objects in the Cyprus Exhibition at the Medelhavsmuseet in Stockholm.

Petra tou Limniti (1929)
Petra tou Limniti is a small rock island on the western part of Cyprus’s north coast, about 100 meters from the coast. The expedition came to be interested in the island during the excavations of Vouni. Here you found the top of the island cultural heritage that was dating to the Stone Age. During one day at harvest time in 1929, excavations were carried out and identified four building periods.

Volvo ÖV4 at cafe in Pyrgos

In the winter of 1931 the excavations were over and the money ended. In accordance with the legislation in force, the findings were shared between Cyprus and Sweden and more than half of the find came to Sweden. The total amount of finds from the excavations amounts to about 18,000 objects. Of these, Sweden received about 12,000. In addition, there is a large cutting material stored in 5,000 shock cartons in the Medelhavsmuseet in Stockholm’s magazine. The find was packed in 771 wooden boxes and was taken to Sweden in March 1931. The transport took one year on one of the Swedish Orient Line ships.

Volvo ÖV4 on Cyprus – problems with the car

For several years, the Cyprus collections were kept in the Krubban quarter in the Oxenstiernska ore farm. They were completely untempered and the climate change became very dramatic. Many unique items were destroyed. Stone sculpture and ceramics burst into the strong cold. 1930s press clippings describe the difficult situation. In 1942, the History Museum in Stockholm published a number of items from the Swedish Cyprus Expedition in the exhibition “Before Fidias”. 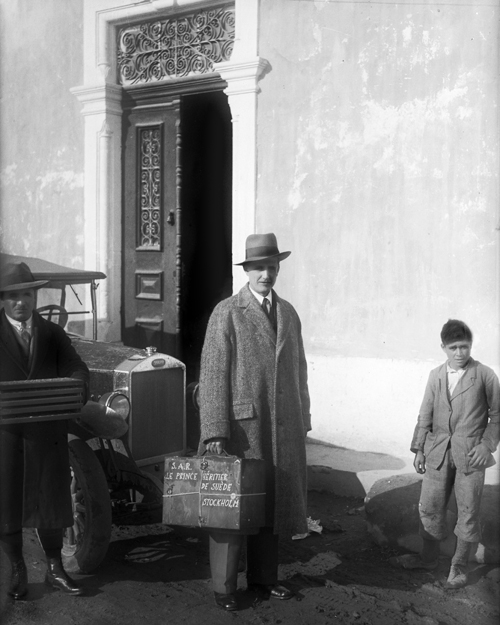 All photos during the Swedish Cyprus Expedition were made by John B. Lindros (August 3, 1898 Vaxholm, Sweden – December 2, 1961 Nyköping, Sweden). He was a Swedish architect and photographer.
During his studies at the Royal Institute of Technology in Stockholm (1923–1925), Lindros was employed by the Nordic Museum and Skansen to study buildings around Sweden. He graduated in 1924. One of his study mates was Alfred Westholm, who later recruited him to the Swedish Cyprus Expedition.

During the expedition in Cyprus (1927–1931), Lindros worked as architect, responsible for measuring and drawing the many maps, plans and sections that are the result of an archaeological excavation. He also worked as a photographer and took an enormous amount of pictures of the excavations. He photographed when SF Studios produced a newsreel about the Swedish Cyprus expedition. As Alfred Westholm himself had experience in photographic and topographic work, Lindros worked mostly in Erik Sjöqvist’s excavation team. When Sjöqvist was ill, Lindros temporarily took over the excavation in Idalion, Cyprus. He was also interested in documenting Cypriot folklore and visited many remote villages with his camera. John’s wife Rosa Lindros followed him to Cyprus and stayed there until June 1928. She also participated in restoration of the archeological findings.

Along with expedition leader Einar Gjerstad, John Lindros was responsible for unpacking the archaeological materials after returning to Sweden. He worked with the other expedition members on the major scientific publication, The Swedish Cyprus Expedition: Finds and Results of the Excavation in Cyprus 1927-1931, volume I, volume II, volume III.

From 1933–35 John Lindros served as assistant at the Swedish Institute in Rome. He then worked at Byggnadstyrelsen in 1936, Svenska Köpmannaförbundet 1936–1937, and the insurance company Liv-Thule 1937–1940. After that Lindros had his own company. In 1944 he was employed at the Västerås county architectural office and in 1947 he became deputy county architect in Södermanland, Sweden.

In February 1960, the Volvo magazine Ratten had an article on the Volvo ÖV4 and its adventure on Cypress: 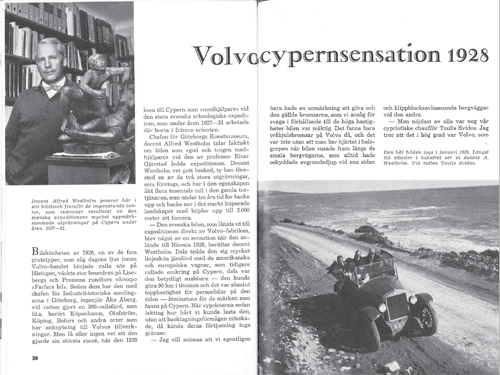 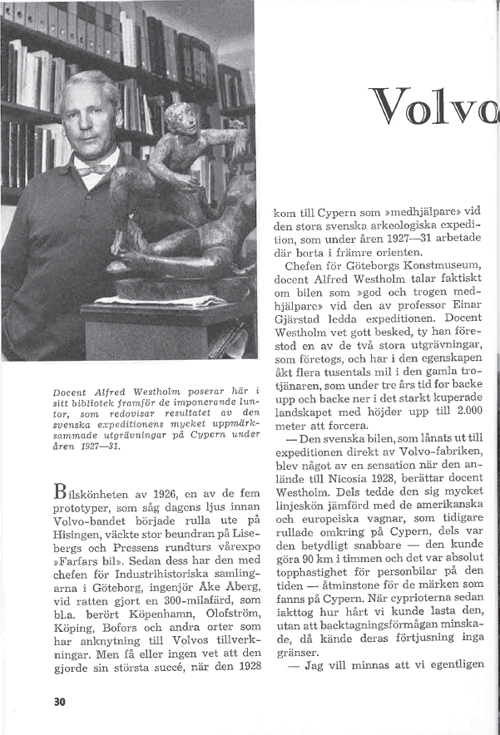 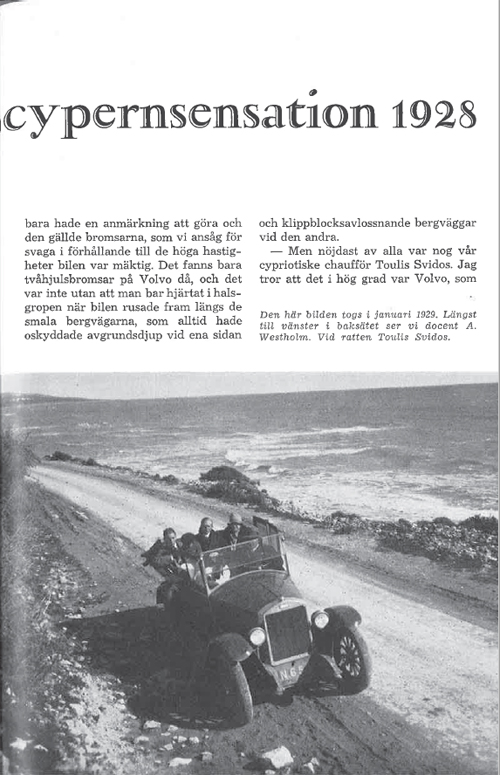 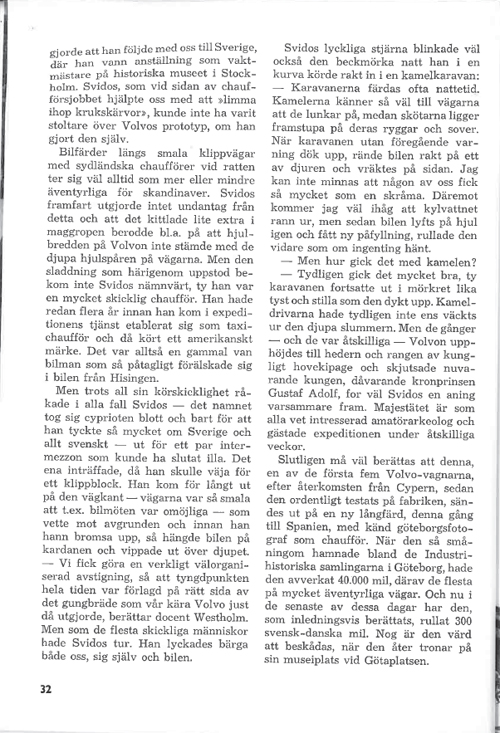