Around 1930 – Hotel Kung Karl in Göteborg

Göteborgs Aftonblad wrote about the opening of the new Hotel Kung Karl in 1896:
“Hotell Kung Karl, located at the corner of Köpmans- and Nils Ericsonsgatorna, thus in the immediate vicinity of the state railway station, has today opened its gates to the traveling public.
The hotel, which is owned by Mr. Joh. A. Holmdahl , also owner of Hotel Royal, is leased by Mr. IF Söderström, who for 14 years has been the owner of the former “Hotell Kung Karl”, now renamed “Hotel du Nord”.

The hotel was built by builder Abraham Pehrsson, the painting work was done by the company “Måleribolaget SA Wahlström”, the upholstery work by the company “Oscar Holmbergs Efterträdare”, the electric lighting by Edvin Andren & comp. 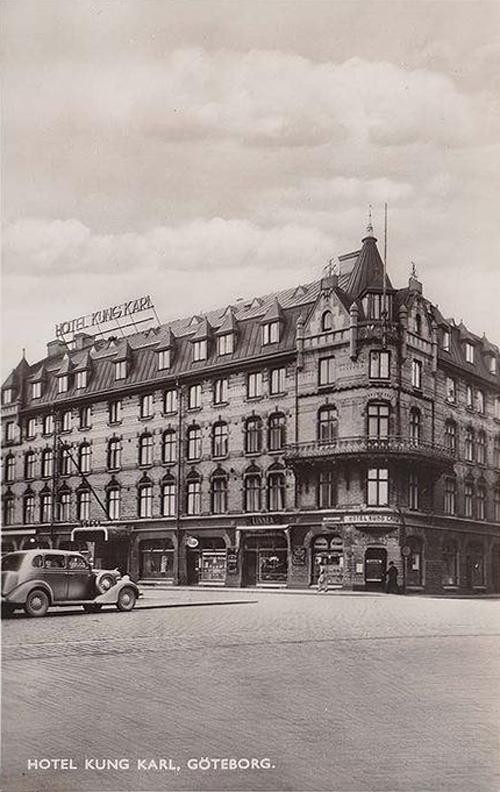 The hotel has 50 elegant rooms in equipment and furniture, distributed on different floors, between which the transport takes place easily and comfortably by means of an electric passenger elevator set up by engineer Rudolf Landén.

Add to this that the hotel is equipped with its own bathing facility for cold and temperate baths and showers and that travelers do not have to miss their little “snapps” in the hotel’s homely dining room, so the hotel can rightly be registered among our city’s first class. ” (From: Göteborgs Aftonblad 3 October 1896)